The economy of the celestial empire continues to develop by leaps and bounds, new districts and business centers are growing up like mushrooms after the rain. Now it is difficult to imagine the chinese residential blocks without skyscrapers and  countless shopping malls. But, if you look closely, among the concrete jungle you can see a completely different China. I offer you take a short walk in the Shanghai slum.

I met one of that districts last spring, when I was walking from the railway station to the city center. I think that today the major part of the houses that you will see in my photos are no longer existed. As a rule, this hieroglyph is drawn on the walls of buildings that are about to be demolished. 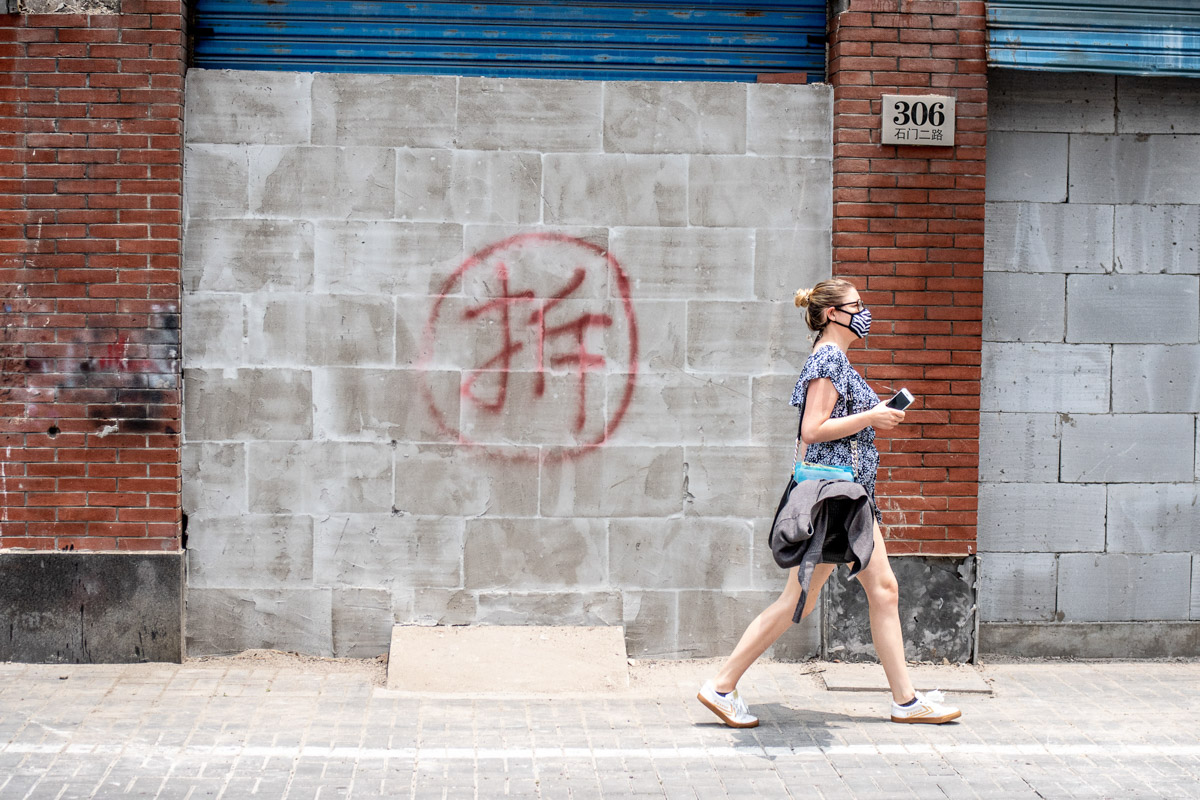 About to be demolished — this concept for China is very indefinite. If at least one of the tenants does not want to leave his home, no one will forcibly expel him. As a rule, people are offered any compensation and housing on the outskirts of the city for moving from such a district. 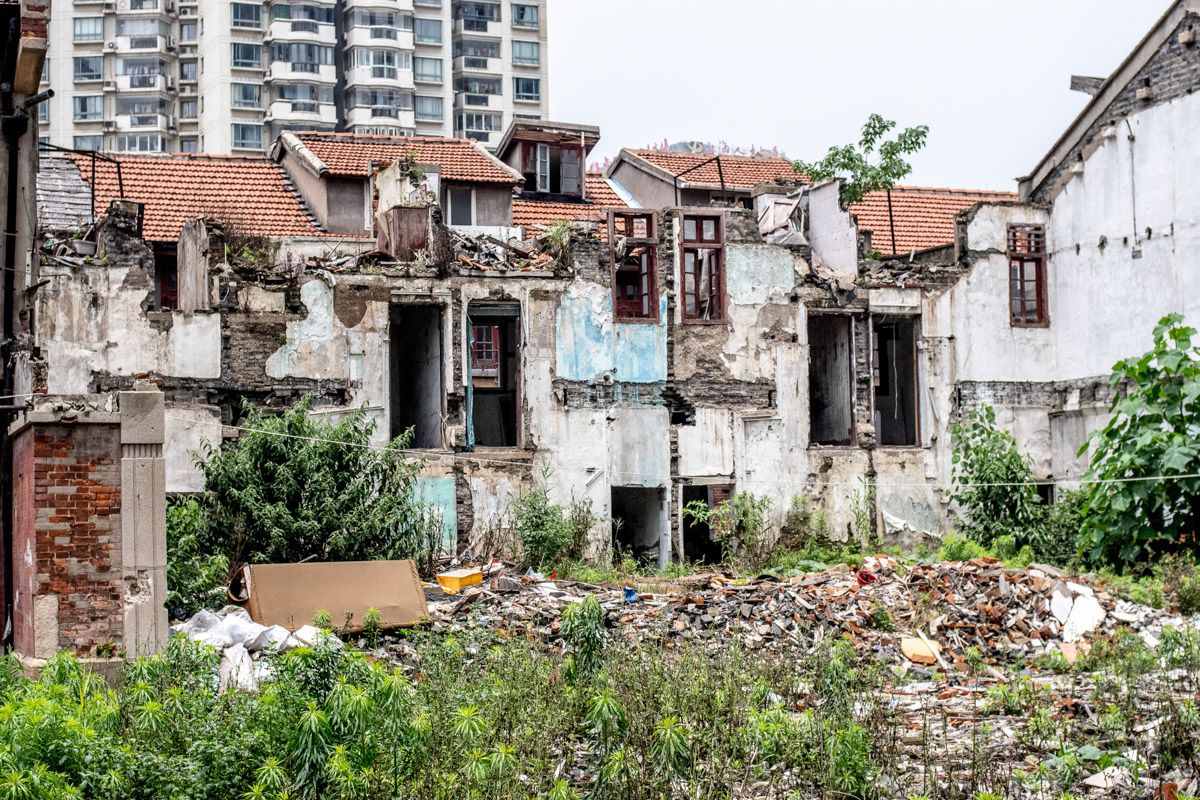 Among the narrow streets I managed to meet a very  picturesque character — a Chinese old man. God only knows how old this man is and why he continues to live in such conditions. 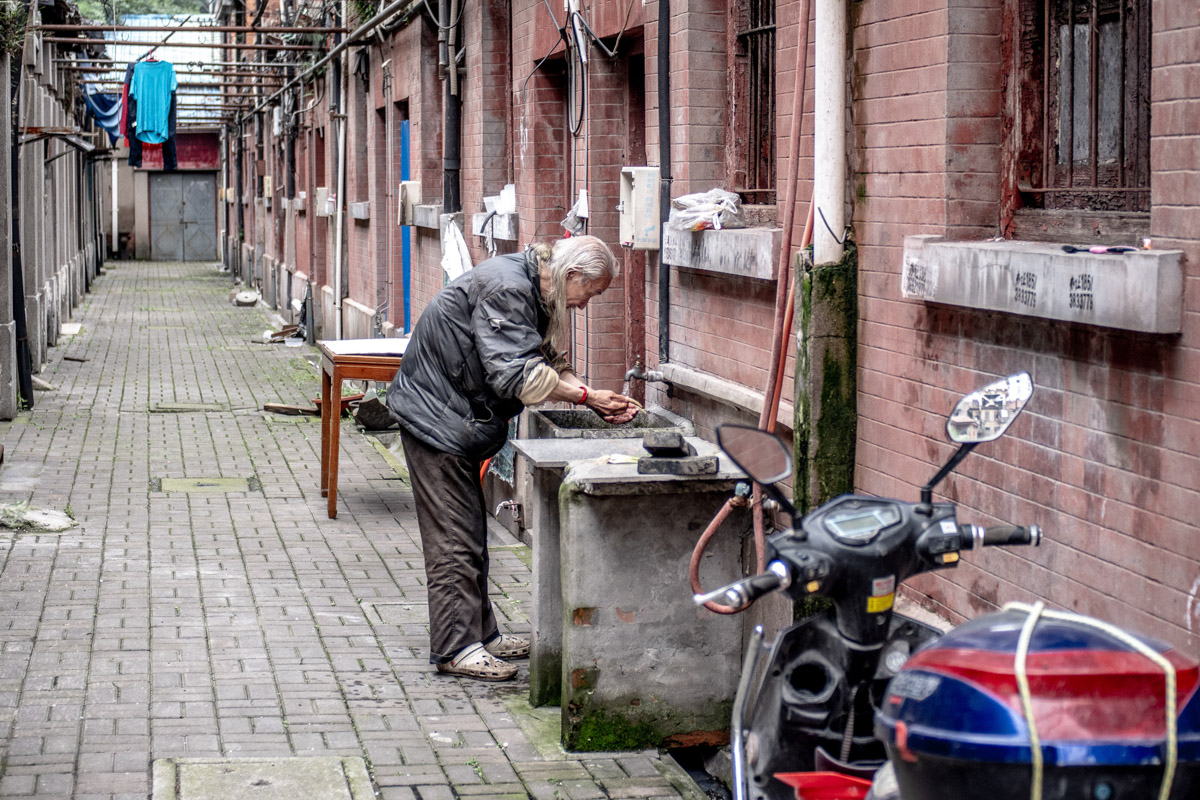 The principle of natural selection is highly evolved in China. If a person is too lazy and hasn’t taken care of his future, he’ll have an extremely poor old age. As a rule, parents try to invest maximum funds in their children so that they’ll be able to support them in old age. 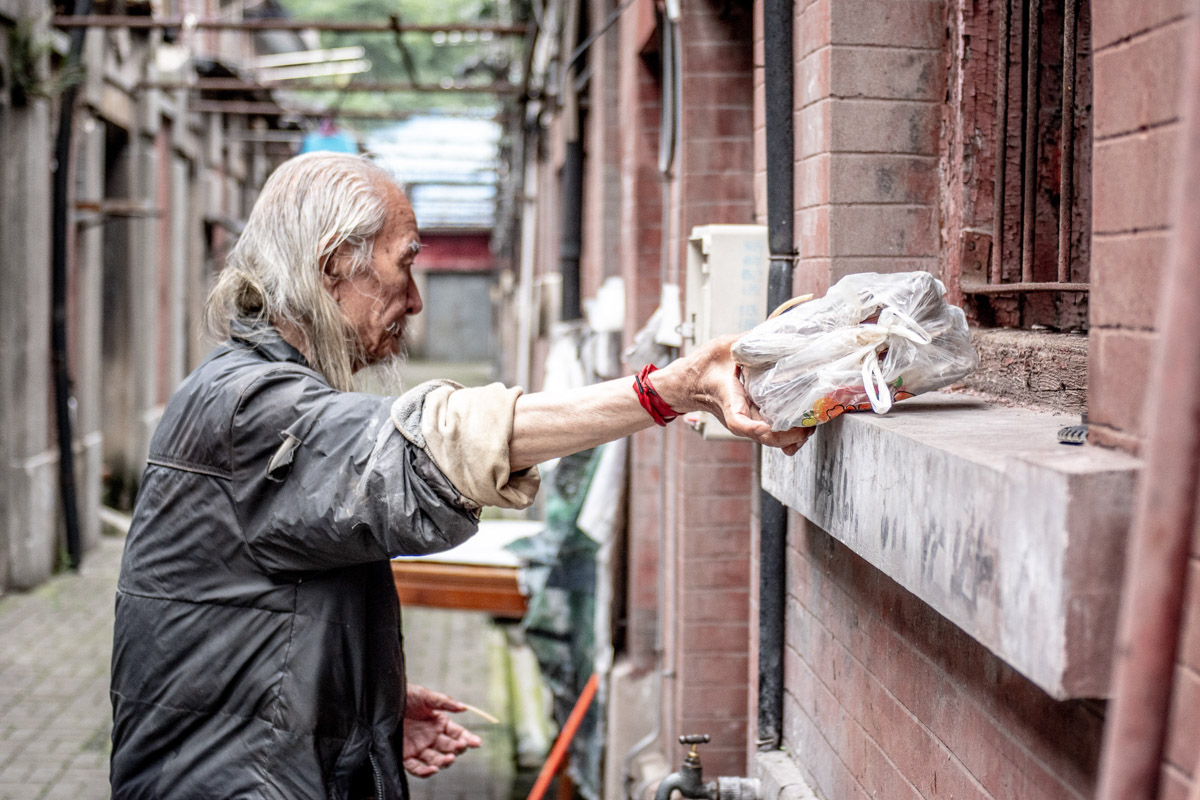 The old man was dressed in rags, but I noticed a pair of long nails on his hands. As a rule, the Chinese show their welfare in that way. Nails confirm that the man doesn’t earn money hard and can afford not to work. It’s not excluded that the man just loves his way of life and doesn’t want to leave his old house. 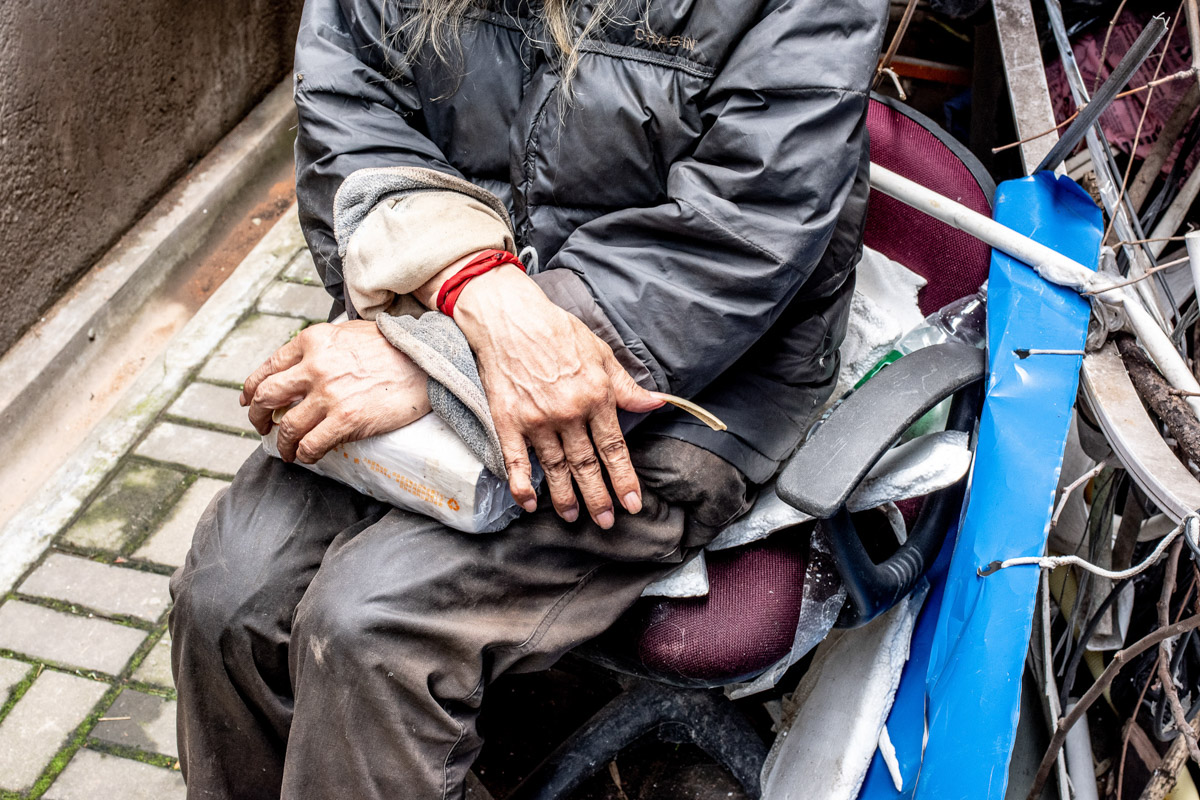 When you are in such an atmospheric place, it’s hard to imagine that behind the walls of this district the life pulsing through a great city. It seems that you moved through time by several decades back. You realize that you are surrounded by modern skyscrapers only if you look up. 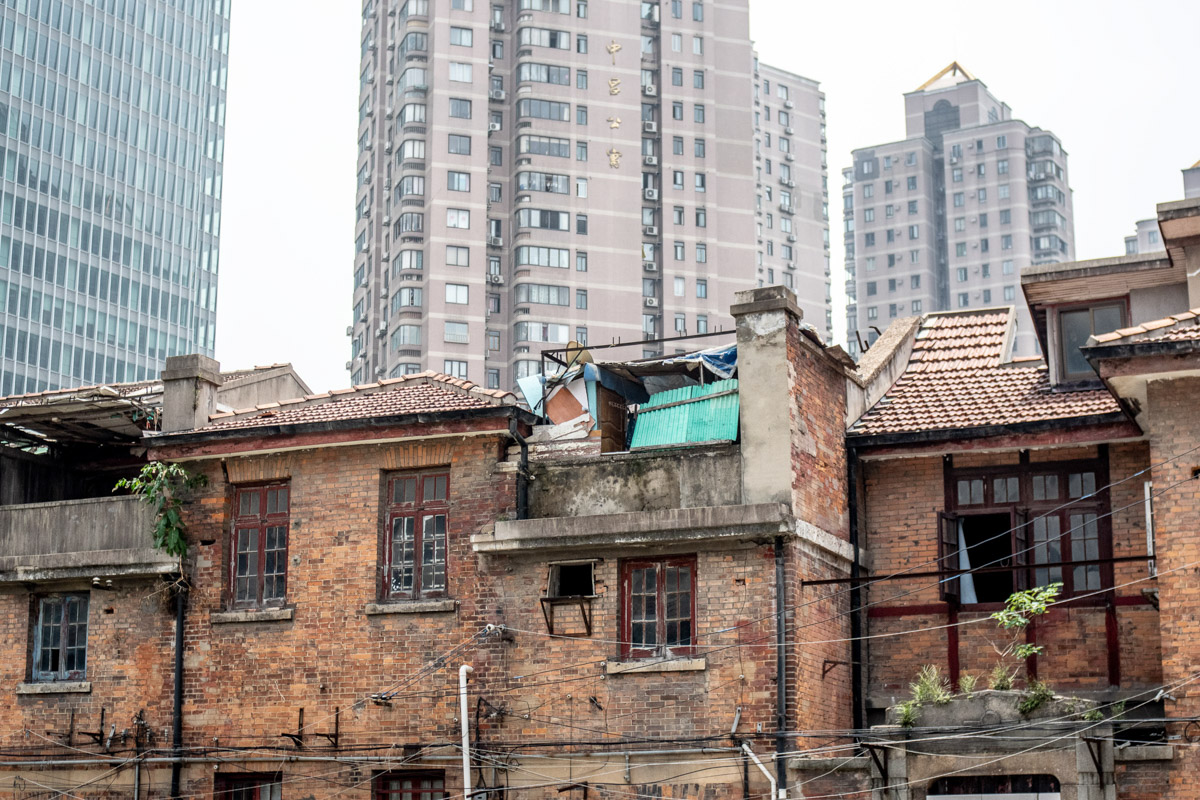 Plucking up my courage and clutching my nose, I decided to enter one of the residential entrances. Yes, sickish smells are heard here — a mix of Chinese spices and rot. 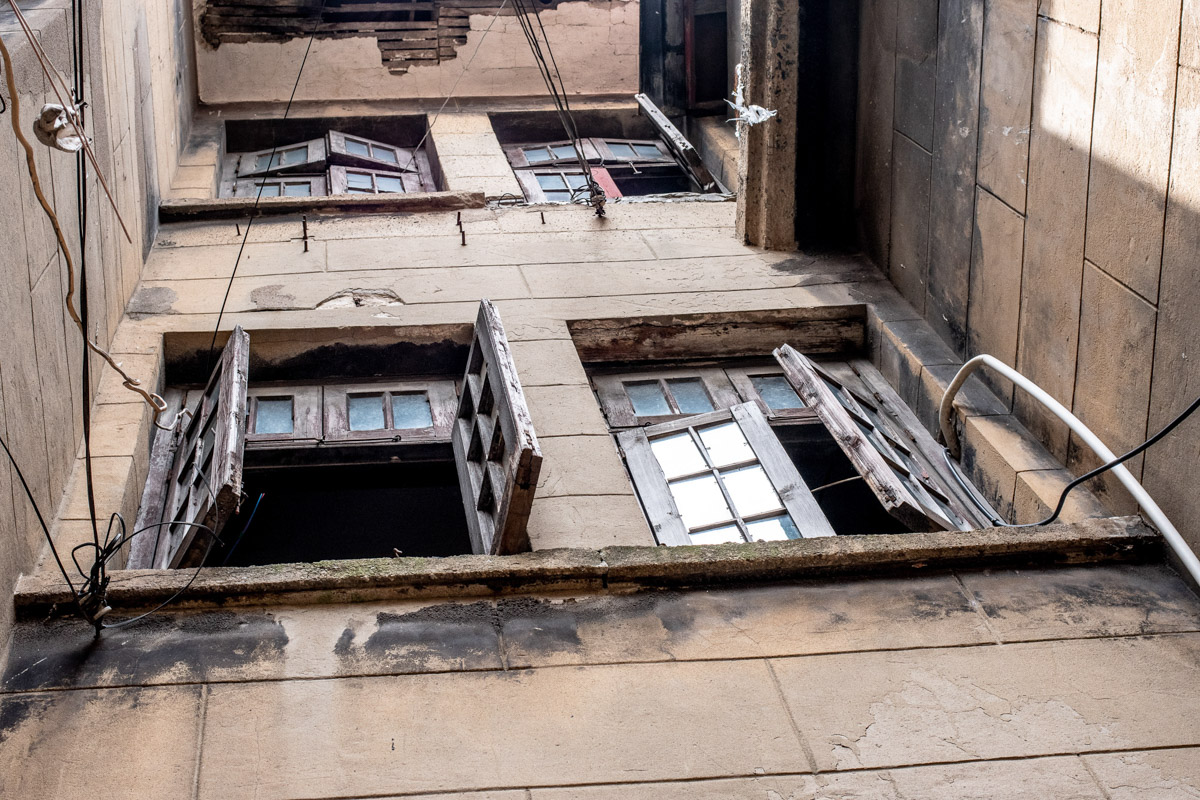 The walls of a small corridor are hung with electric meters and wires. Flimsy doors with little padlocks lead to the small apartments. 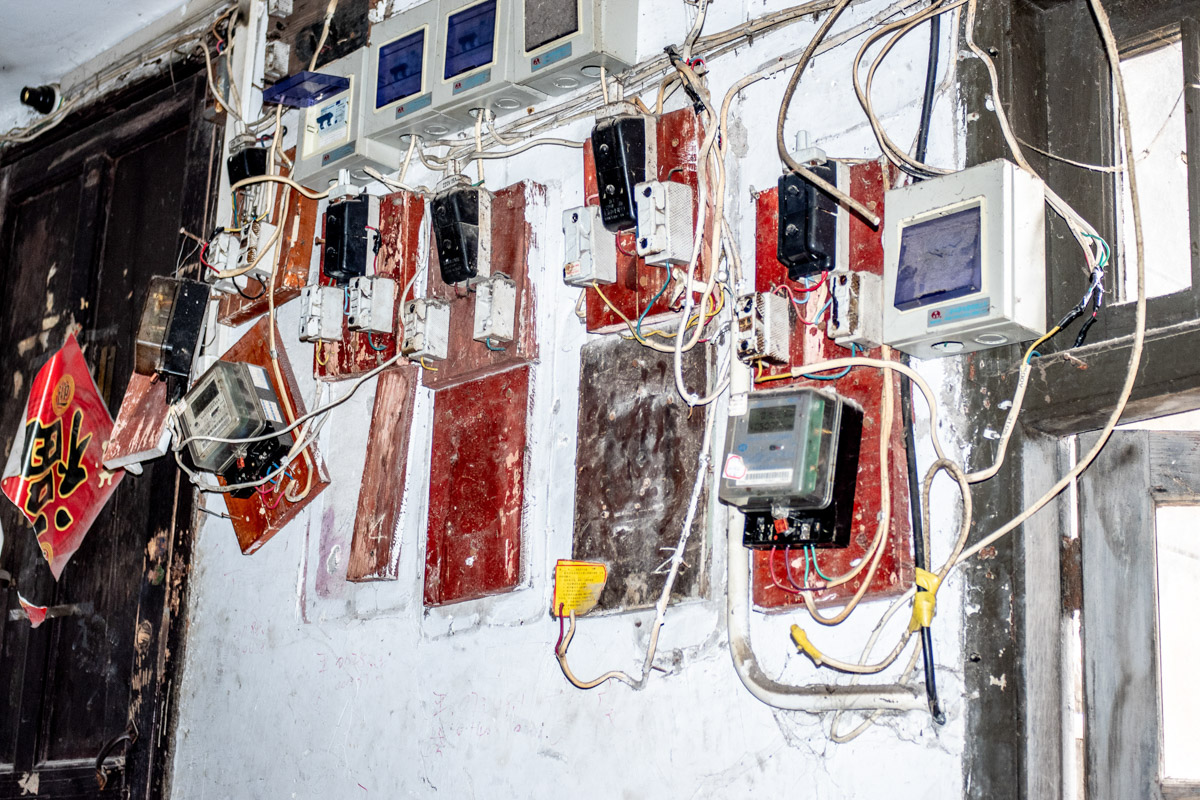 There are shared kitchens on the floors, which at the same time perform the role of the laundries. Look at this sink, is it possible to wash out anything in it? 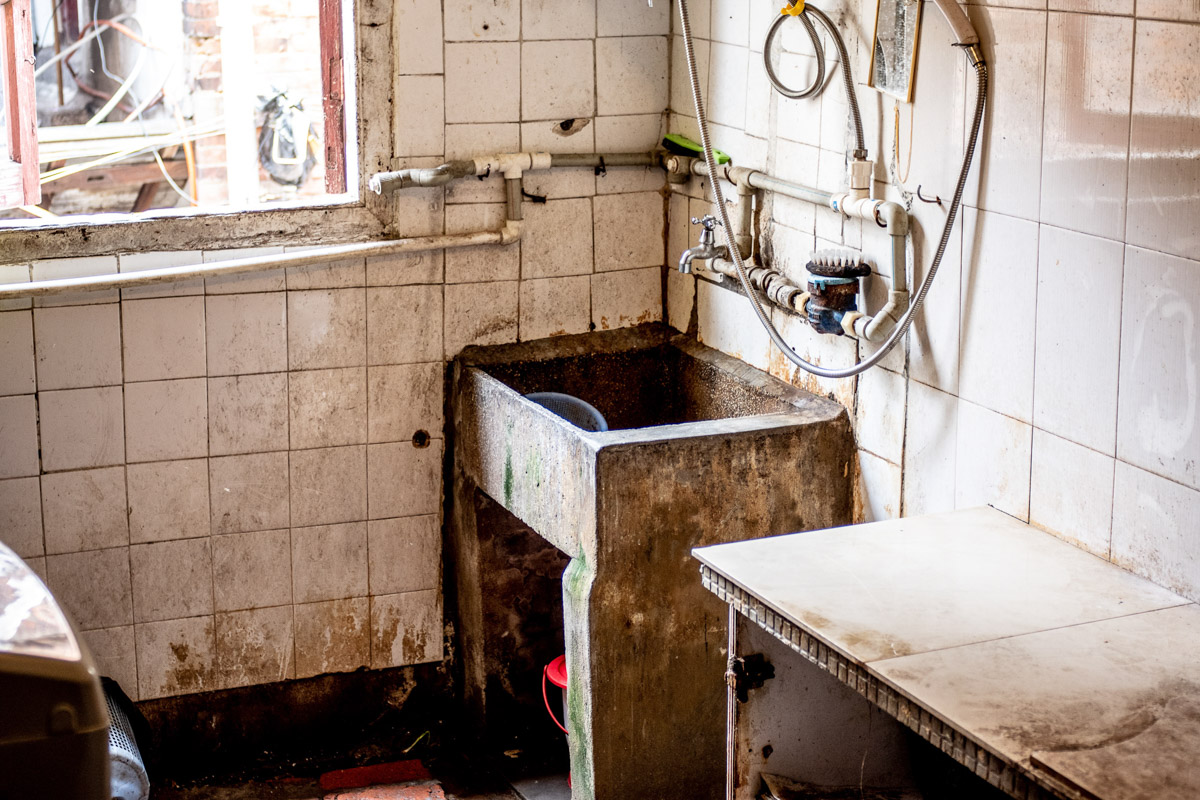 It’s difficult to put into words the stench coming from an old washing machine. 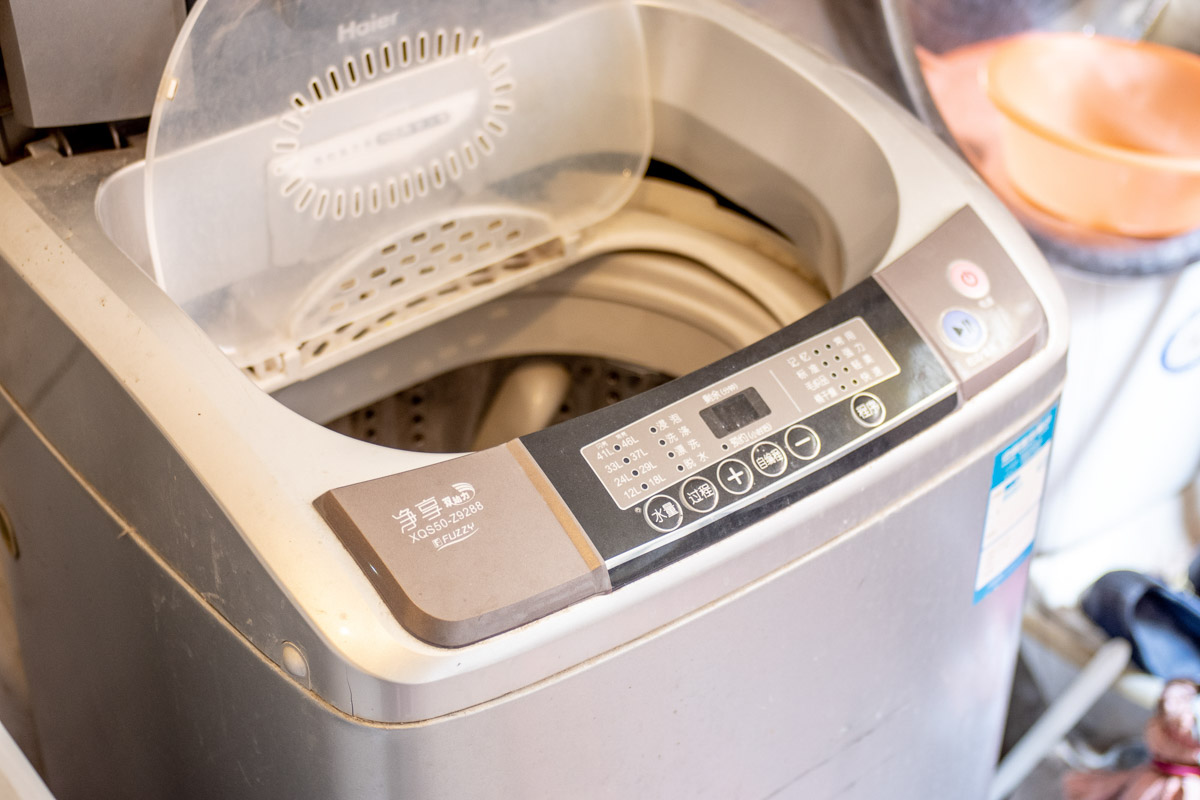 Here is the kitchen-ware, which stands at the opposite wall. Plenty of soy sauce, spices and butter. So to speak, the minimum set for any cuisine of China, where no course is prepared without condiments and sauces. 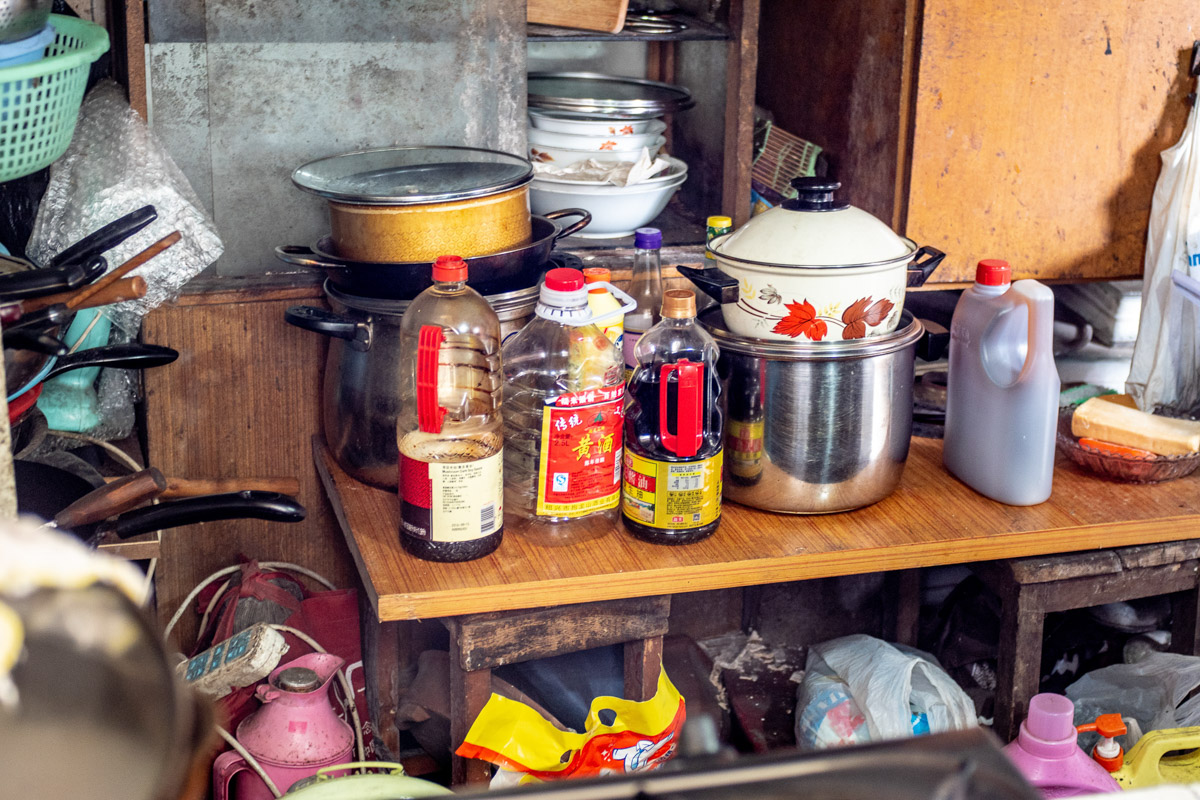 Judging by the clothes hung on the washingline, in such conditions live not only adults but also children. Here various garbage and broken toys are lyed around. It’s incredible, but people continue to live in almost demolished houses. And have no fear, that walls may collapse and bury entire families under a pile of stones. 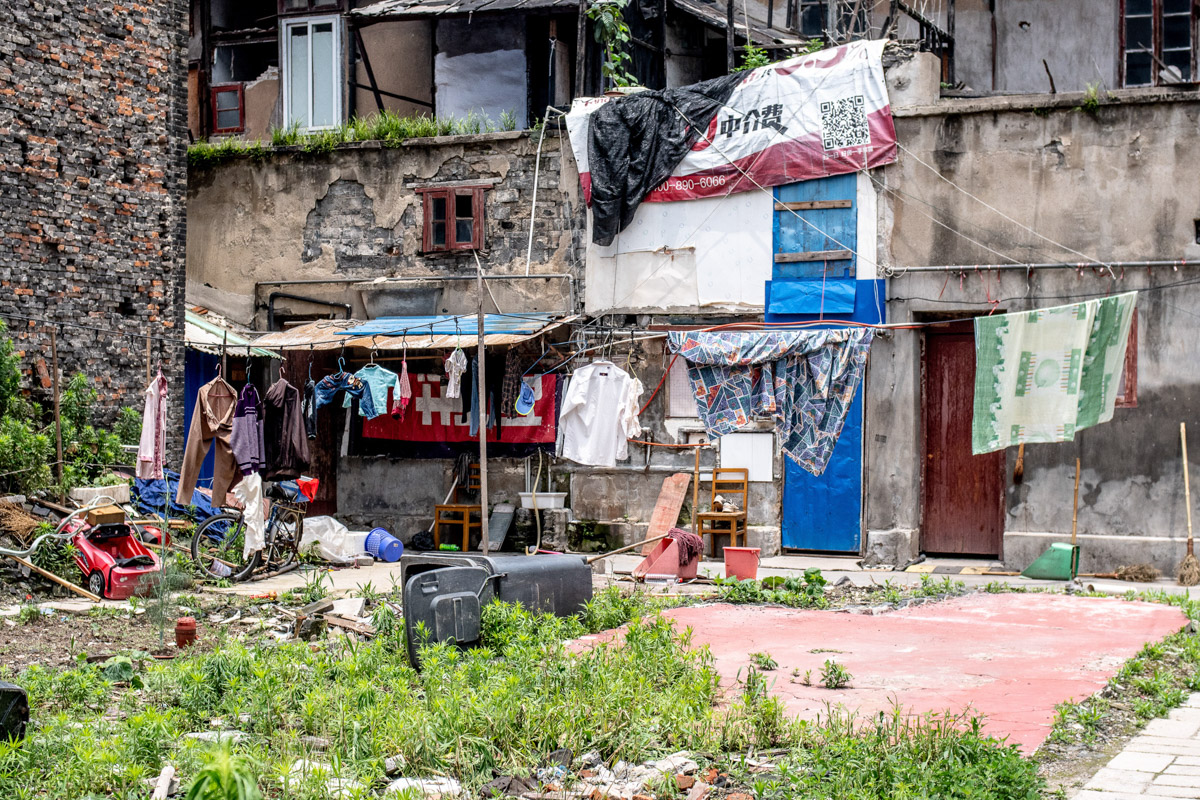 In such slums it’s impossible to settle or set up any commercial enterprises. As I said before, people continue to live here of their own volition. Either the tenants are not satisfied with the offered compensation for the apartments, or they just got used to this way of existence. 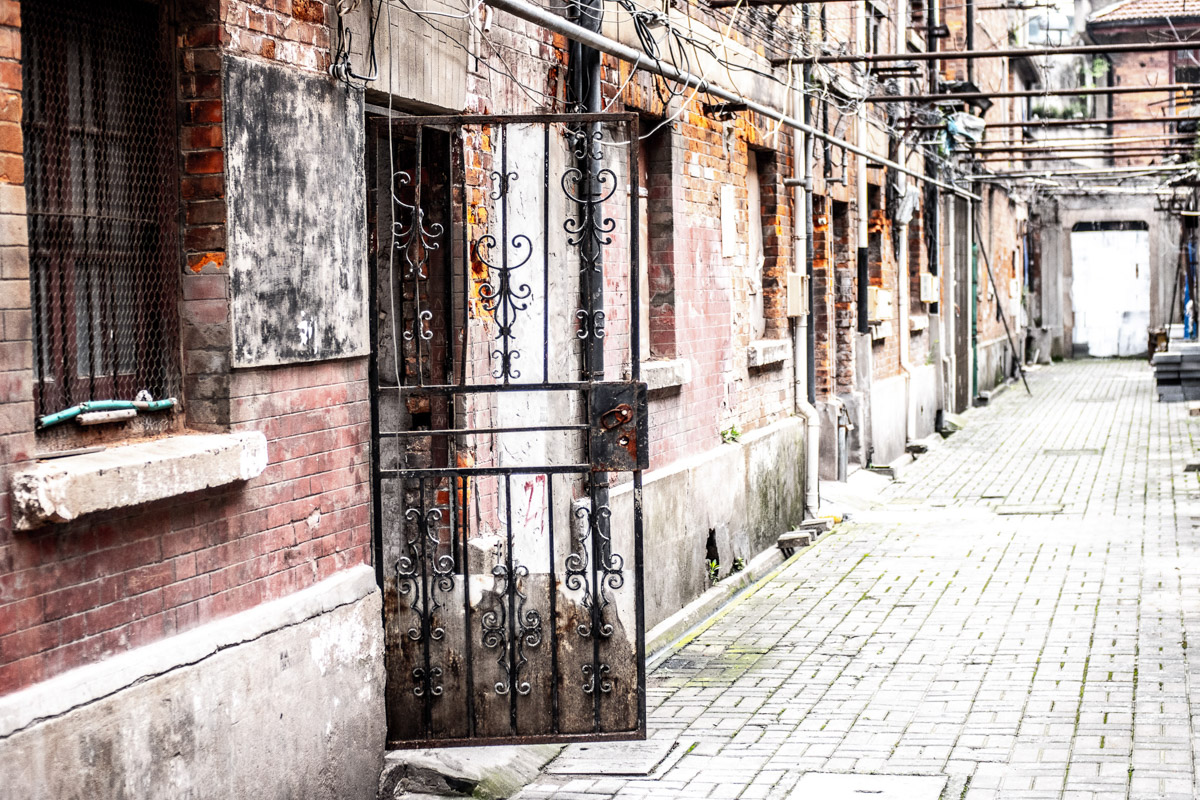 While I was walking around the half-deserted district, I saw engineers making some notes and studying the drawings. Perhaps, any modern residential block or shopping center’ll be built on this place. It’s difficult to imagine the land value in the central point of Shanghai. But, the price tag for an apartment in a new house on this place may reach several million dollars. 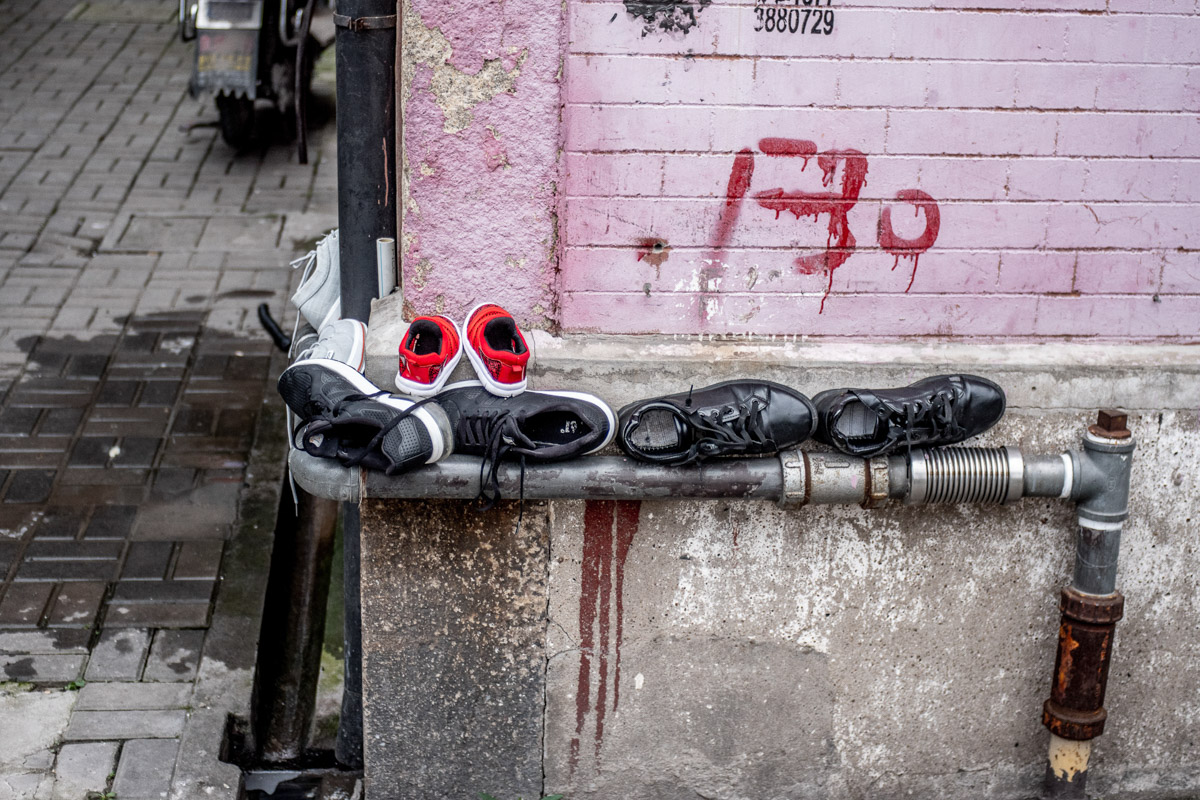 In the end, I want to tell you about the Chinese beggars, who simulates sick elders. These people can be met on the busy streets, where a large number of tourists pass by. Locals don’t trust such ‘disabled’ anymore and avoid them. 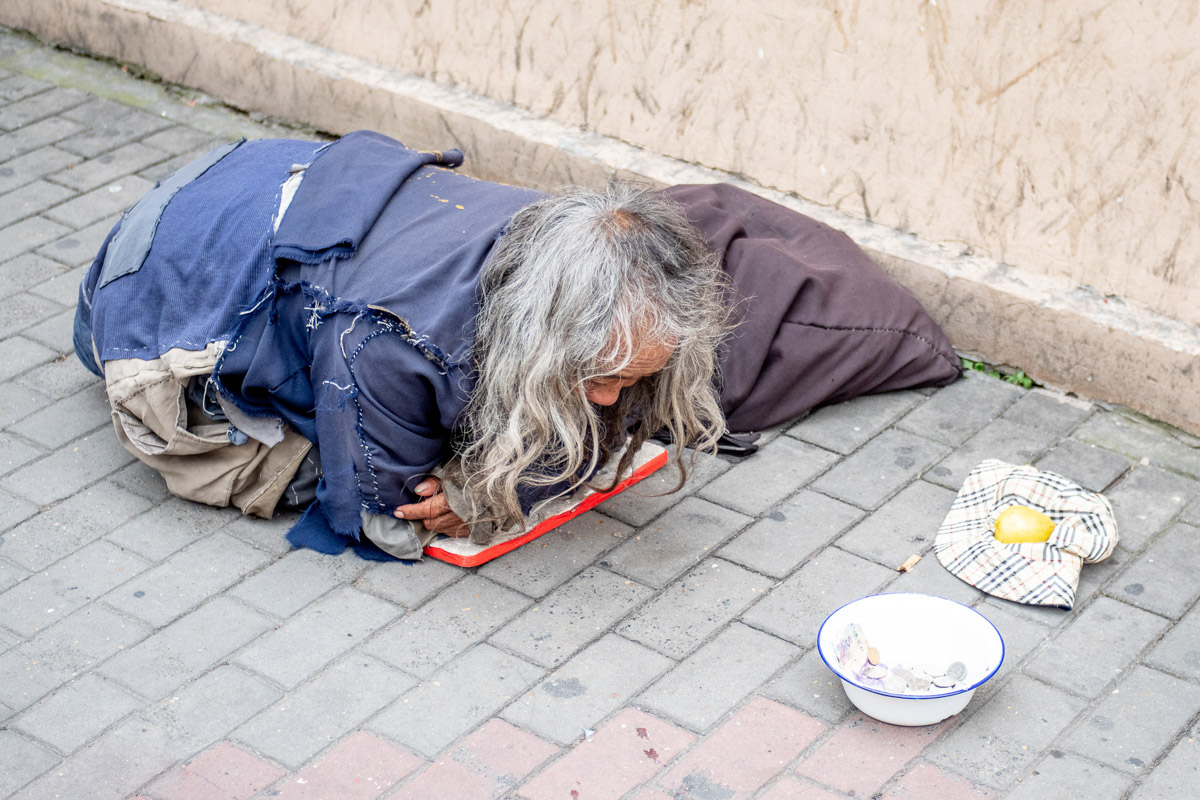 If you tell such a beggar that you have no money, he can give a smartphone with a QR-code for money transfer. The old man on the photo saw that I was photographing him, jumped up and ran after me. Fortunately, the chase didn’t last long and I managed to run away.