I managed to find by accident on the back streets of the Chinese megalopolis of Guangzhou the whole district with the factories of counterfeit clothing. As a rule, goods from such factories get to the clothing markets, and then to branded shops.

There would be no happiness…

It’s not so easy to find a street with underground factories of clothes or any other goods in China. Even if you look from the height of the windows of the skyscraper, you’ll see nothing but an ordinary city block. I think that even local historians won’t be able to show you the right direction or just won’t want to do that. 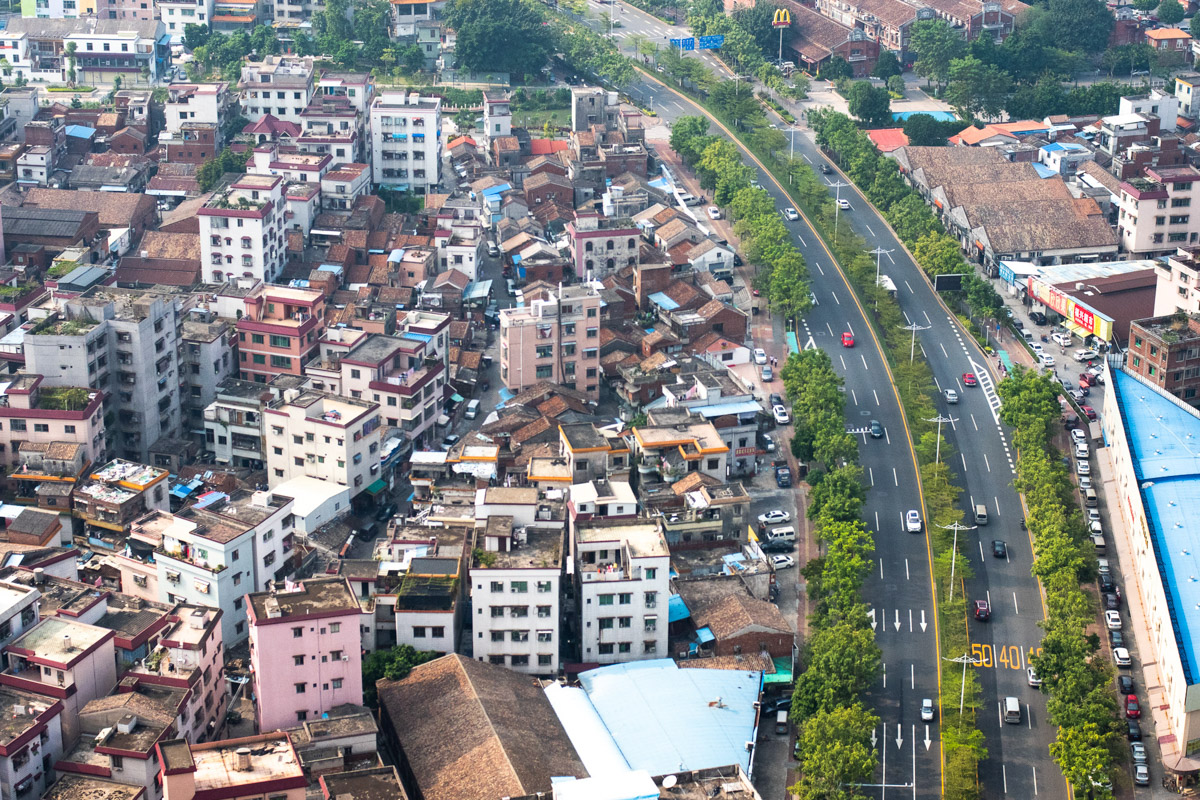 As a rule, tourists don’t visit such hot spots, and I myself ended up here by by accident — get the wrong bus route. It was decided to go to the required address on foot, and shorten the route , passing through the narrow streets of old Chinese houses. Such close districts could be seen in old movies with Bruce Lee. Today mouldy residential blocks are safely hidden behind modern residential communities of glass and concrete. 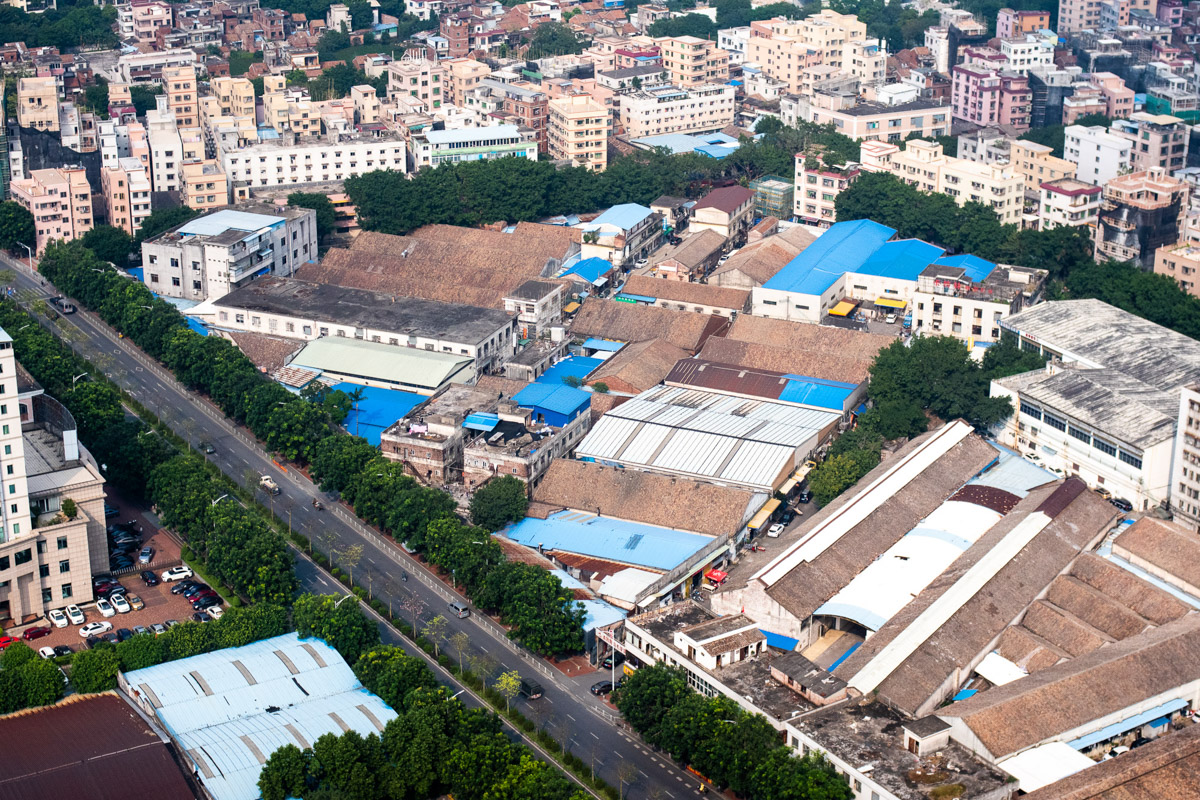 It’s pitiable that the photos don’t render the smell that fills up these districts from top to bottom. Otherwise, you would be able to feel the true atmosphere of non-tourist China to the full extent. 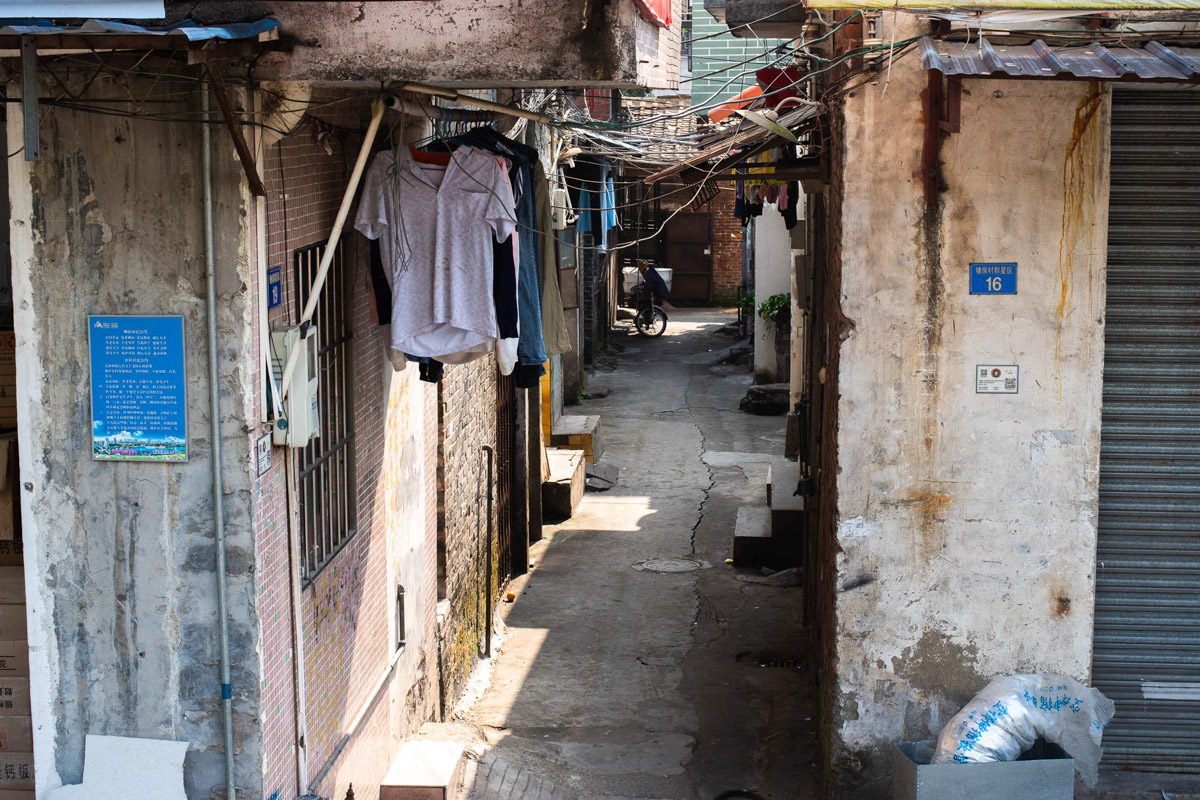 On the shabby walls decorated with mold cockroaches run time and time again. Old clothes are drying on washinglines. Stalls and eateries with cheap food can be met rarely. I saw a man who cut the throat of a chicken and slowly carved her. 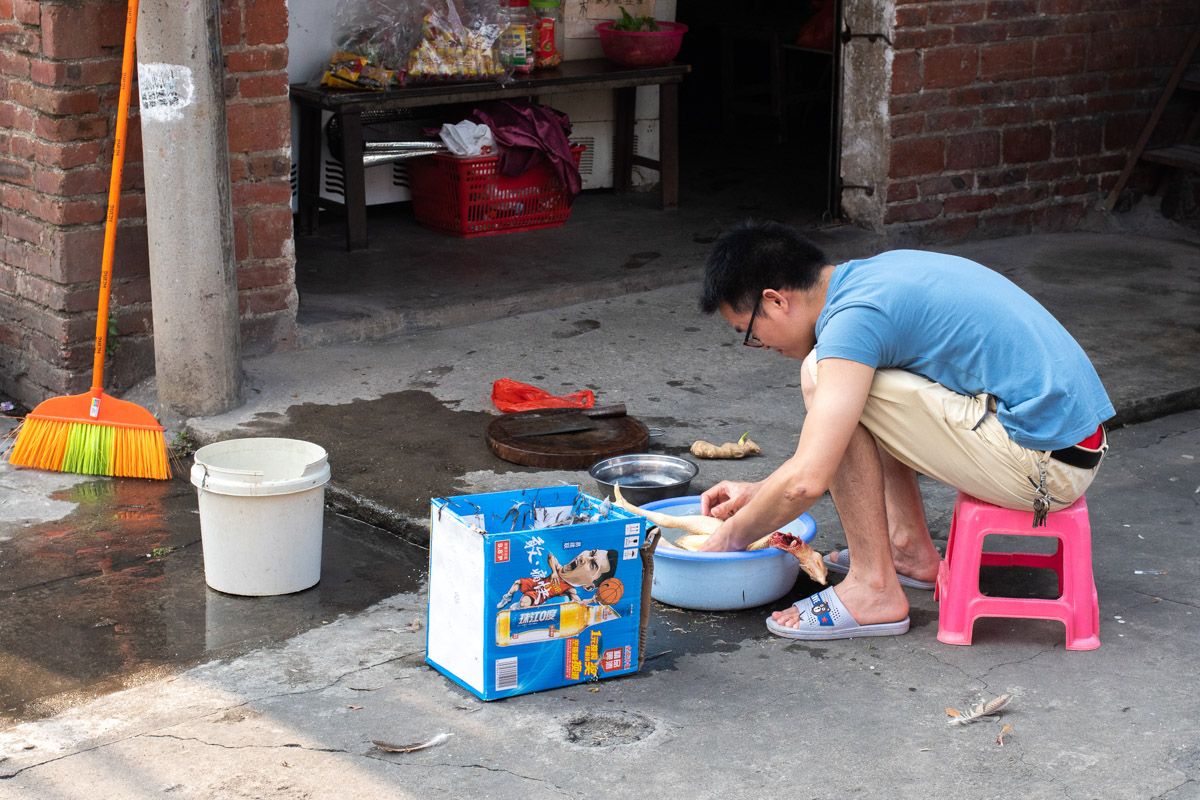 On the other side I watch not less than an interesting picture — the girl pours water on a crow sitting in a cage. By the way, cats and dogs sitting in cages can be often met on the streets of China. 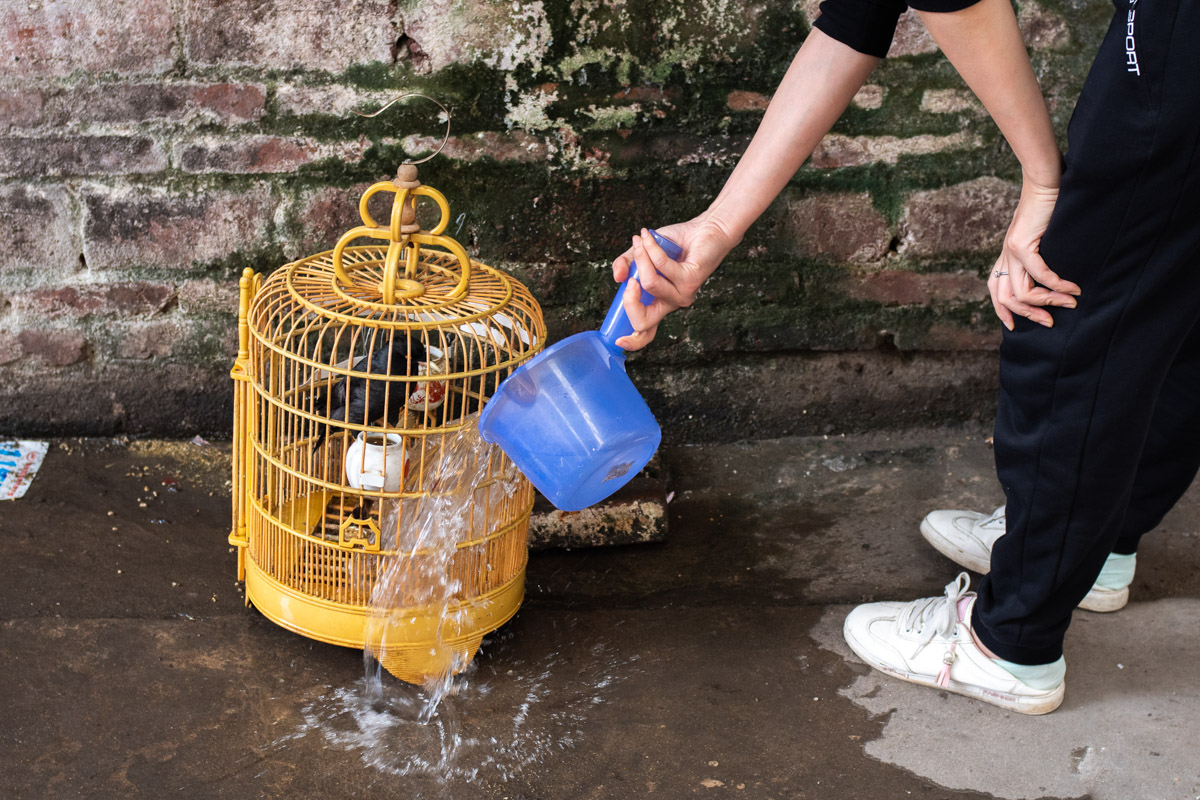 The locals didn’t obviously expect to see a foreigner with a camera and closely watched me. But there is nothing to fear, the Chinese can’t cause any harm. At first, we are being watched by dozens of street surveillance cameras, and secondly, Chinese themselves are very friendly. 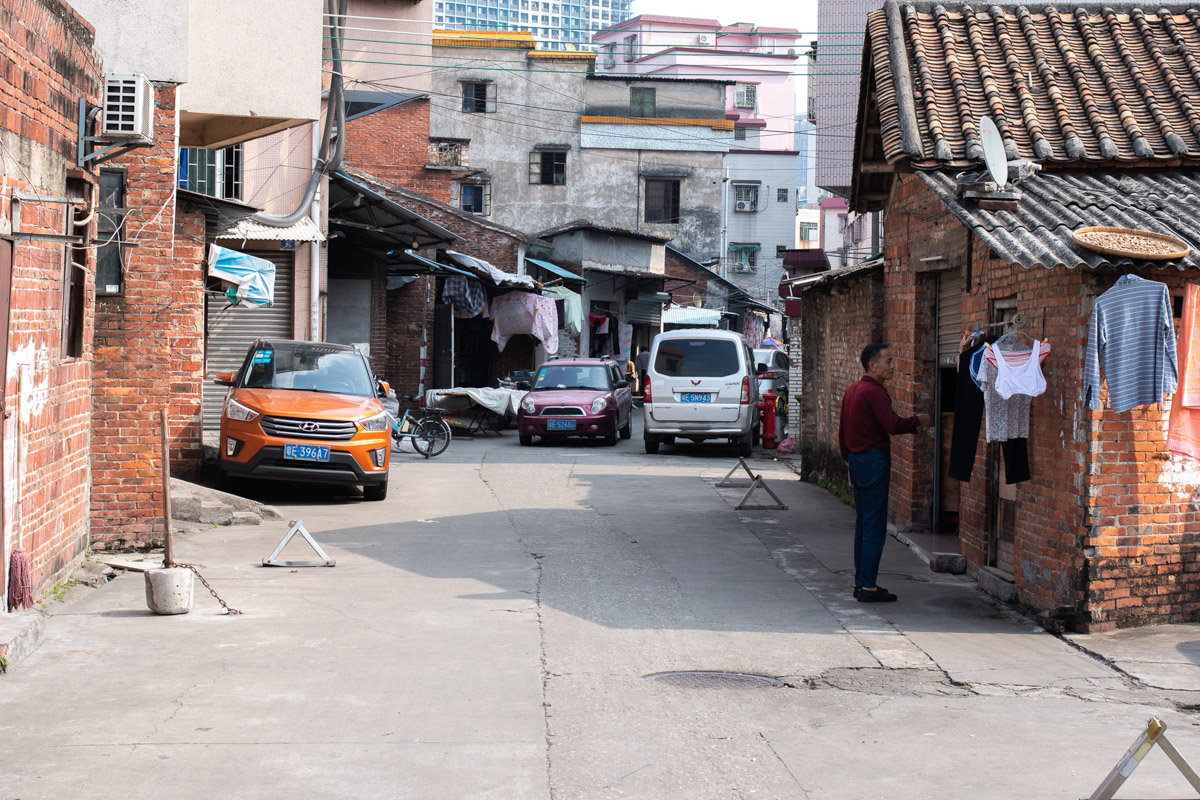 It’s hard to imagine how do they live in these old shacks, where only Mao Tse Tung’s favourite ‘cat litter’ is available. Do you think that these people are not satisfied with their lives or will complain about something during a conversation? Never, they don’t have that upbringing, they accept all of the conditions for granted and love their country. 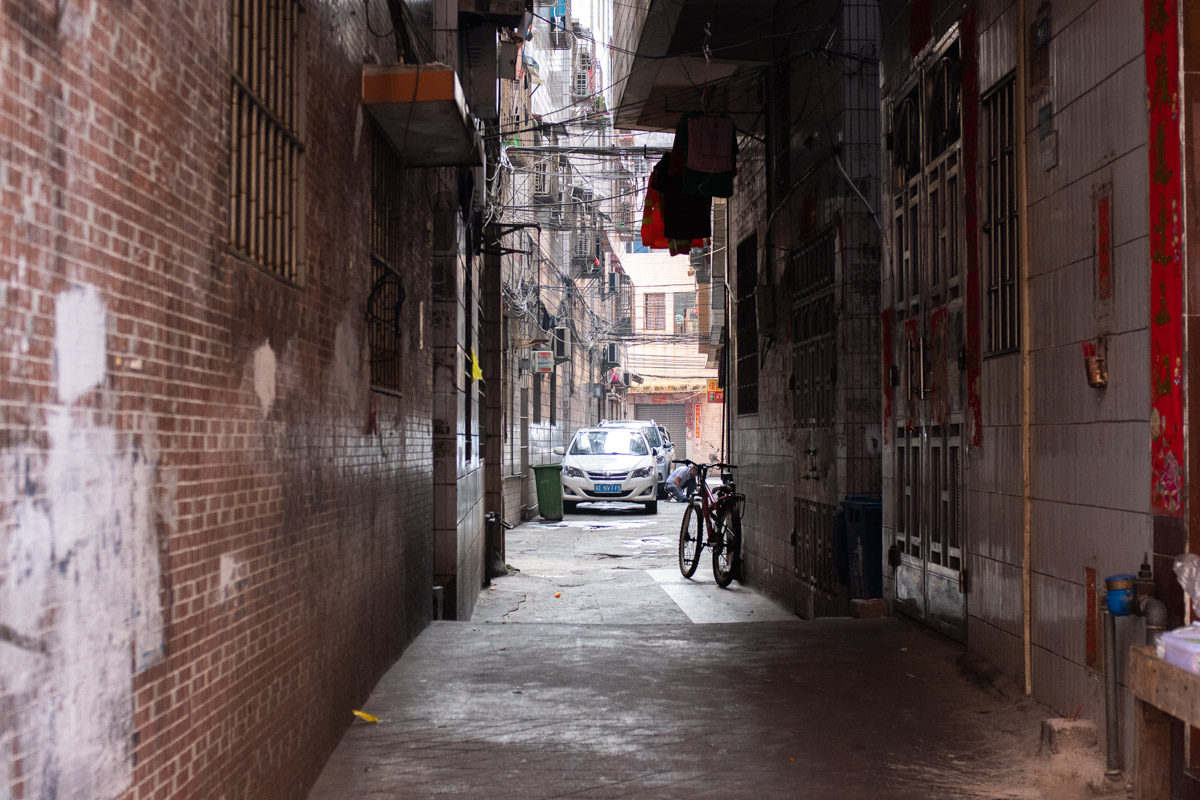 I continue to ramble through the streets and explore the local life, when suddenly stood as if riveted to the spot. There layd the whole stack of children’s costumes of Mickey mouse, I remember, in Paris Disneyland one was sold for at least 50 €. 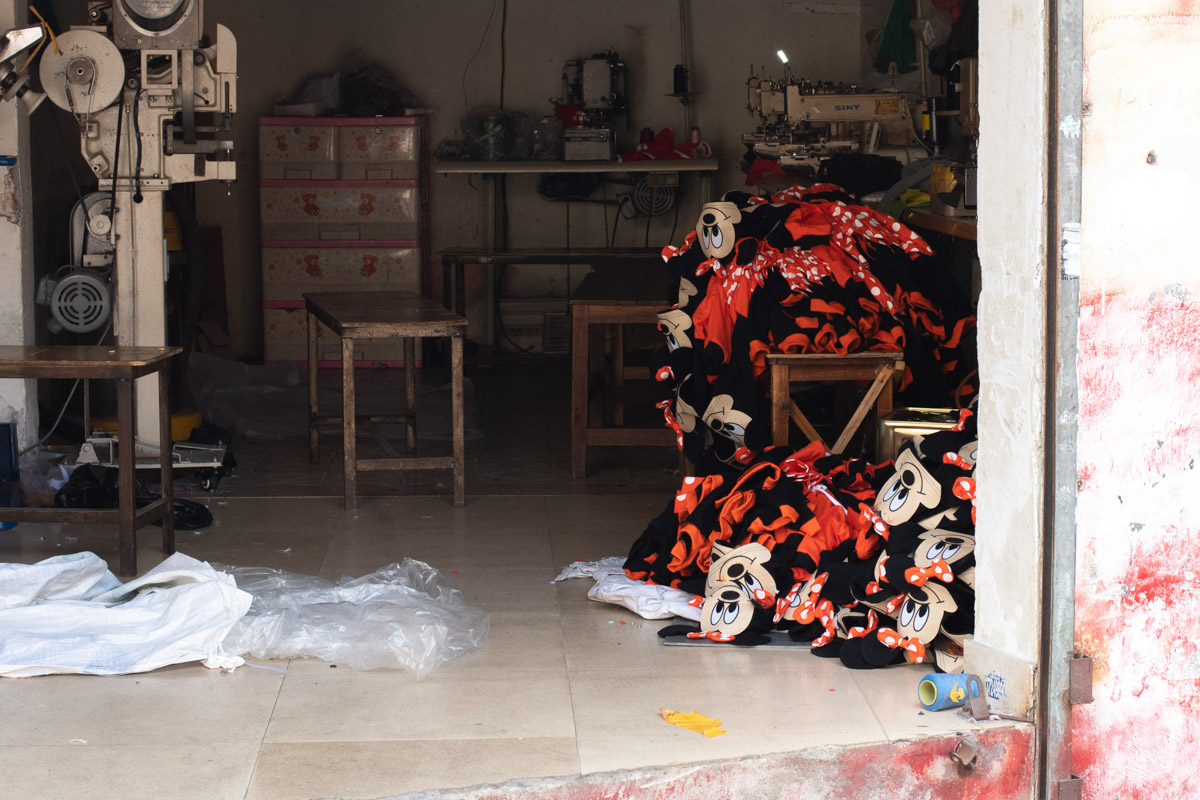 I look around and feel a slight shock: people are sitting everywhere and sew something. I begin to look closely and understand that the ‘mouse’ costume was the most innocuous counterfeit. There are no complex machines or units, the whole work is almost manual. A sewing machine is maximum, and that one for three. 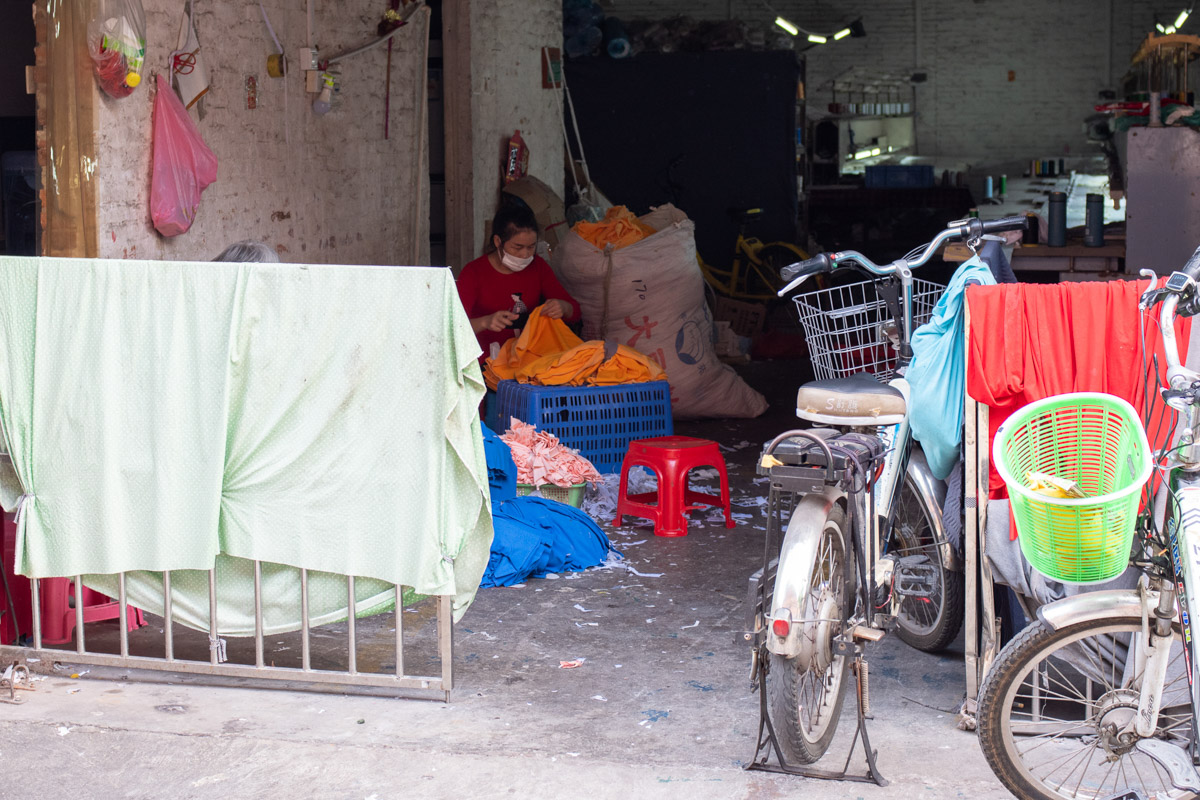 …to the entire underground factories

My unplanned walk seems to be getting more interesting. Having passed a residential block, I came across large hangars, which hid the whole factories. The gates of some manufactures were opened and it was easy to look inside. 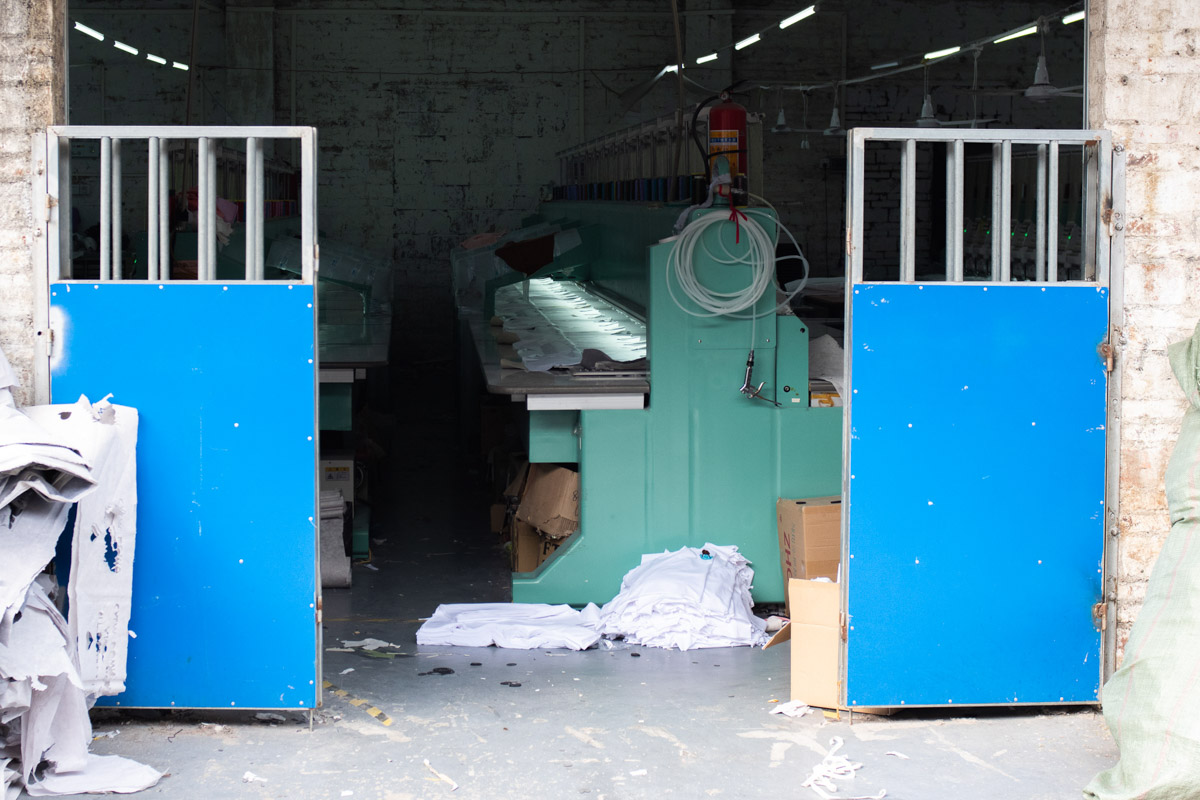 More serious wares may be found here, children’s “Spider-Man” costume is for example. 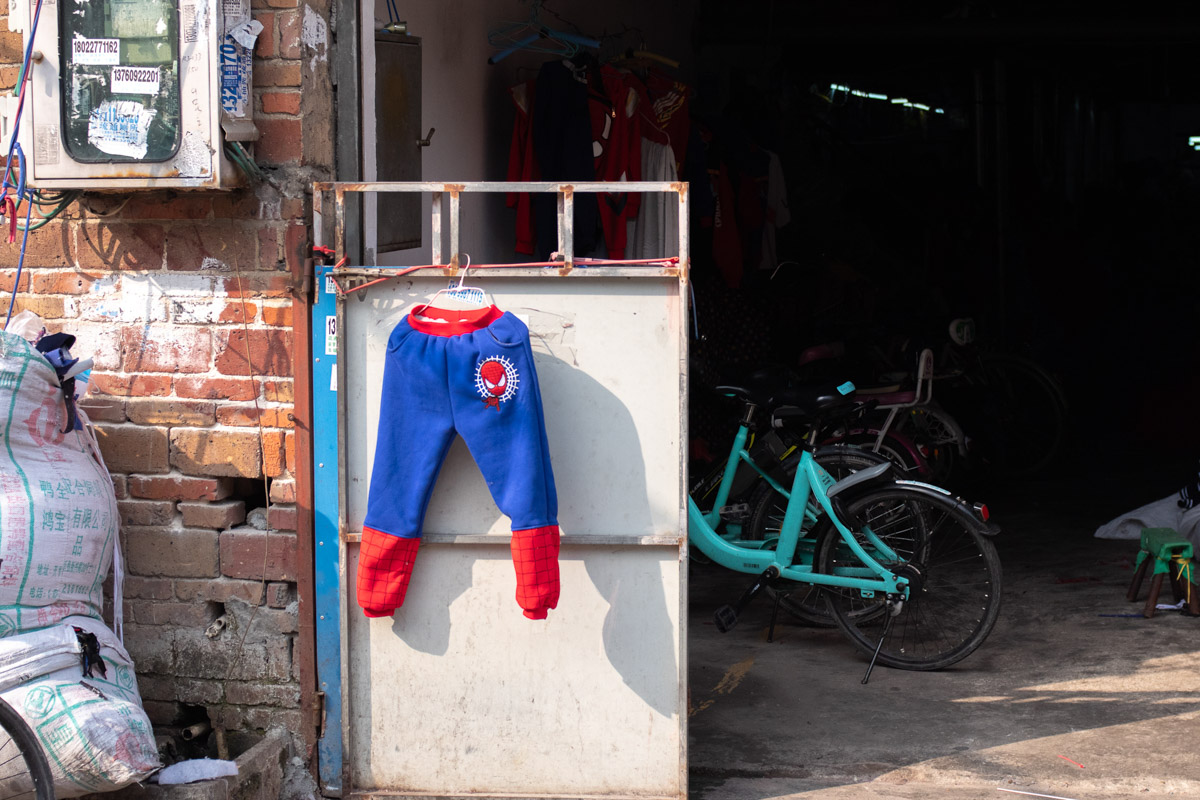 As a rule, such factories don’t provide showrooms and samples are hanged out directly on the street. The customer can come up and choose interesting stuff. For example, a thousand polo shirts may be purchased and asked to put the Lacoste logo on them. 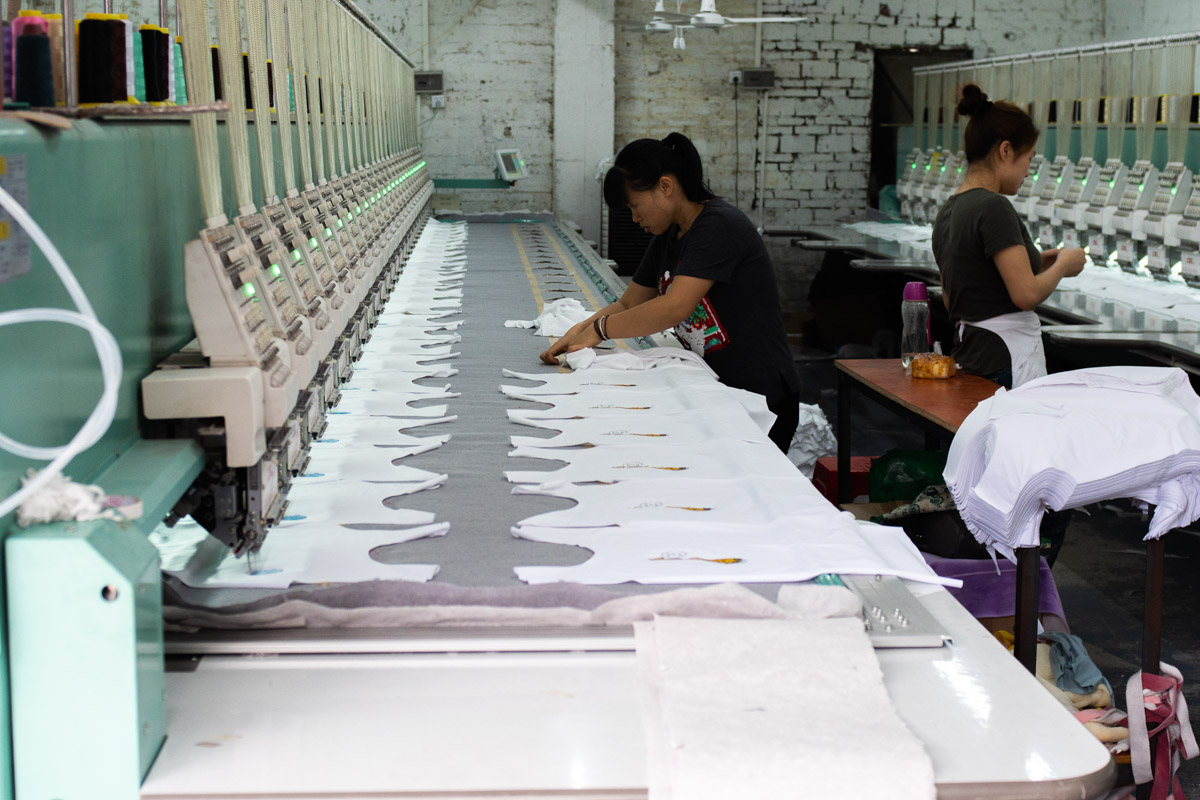 Don’t believe? Look carefully at the clothes that holds the woman in her hands on the next photo. Yes, this is the one “original” Nike, which will afterwards be sold in “branded” stores and outlets. 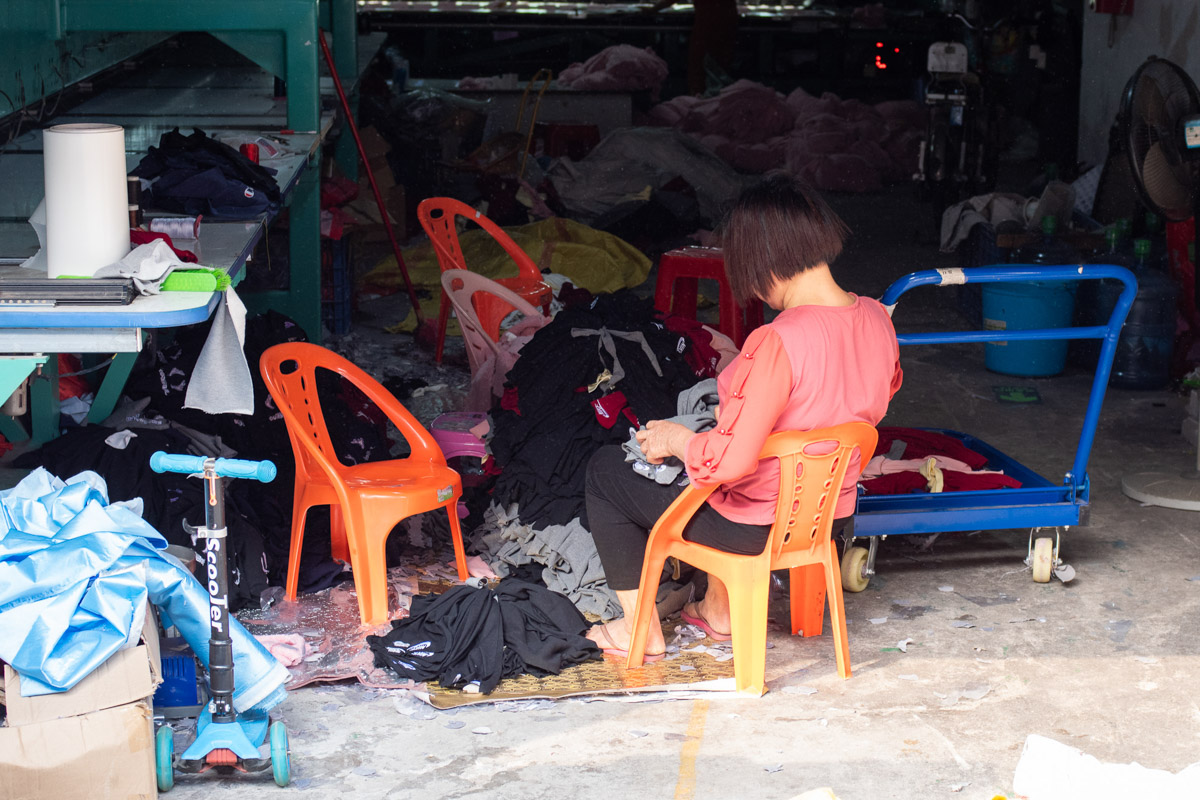 Where do goods go away?

Primarily, the product from these factories is supplied to the most markets in Guangzhou, where from “flies away” worldwide. I have been to such markets and I can say with full confidence that businessmen from Russia make purchases there most of all. 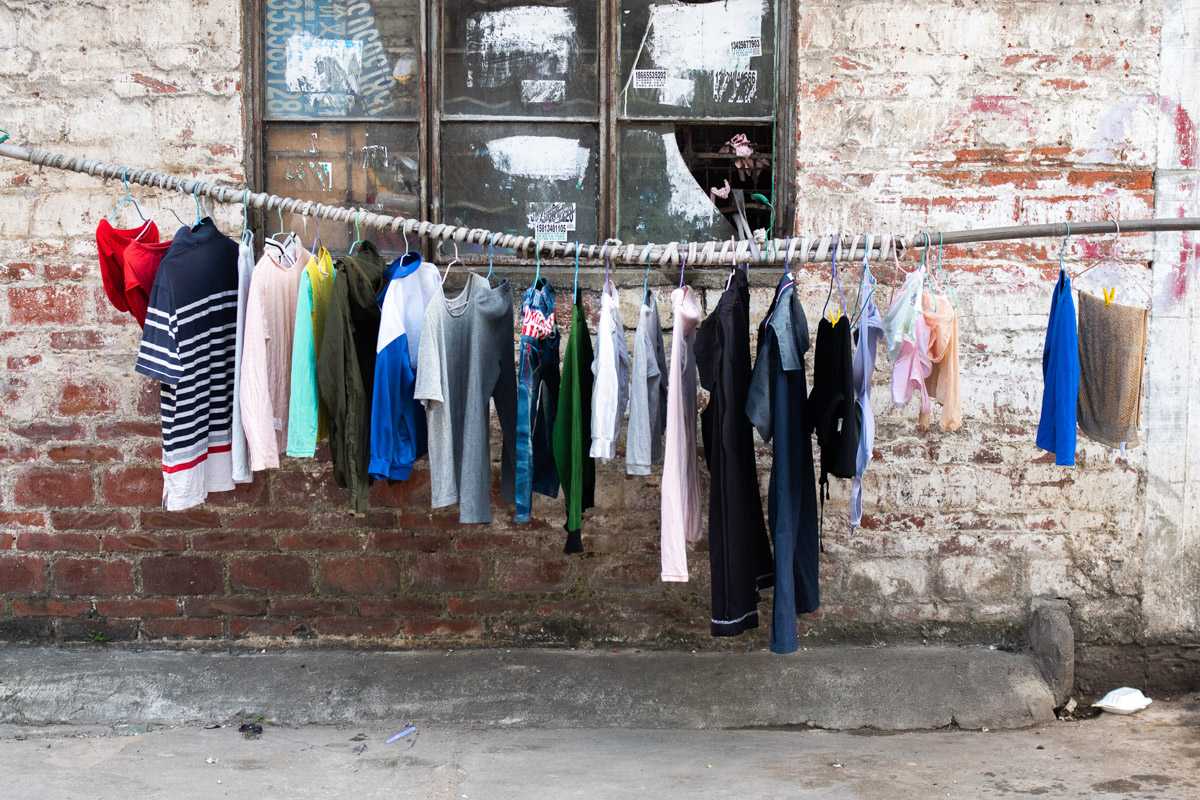 As a rule, russian entrepreneurs ask for the cheapest goods of a low quality. It’s sold afterwards under the guise of branded products. Clothes of any brand can be made at this factory. The label tag isn’t also a problem, it can be purchased on the same market. 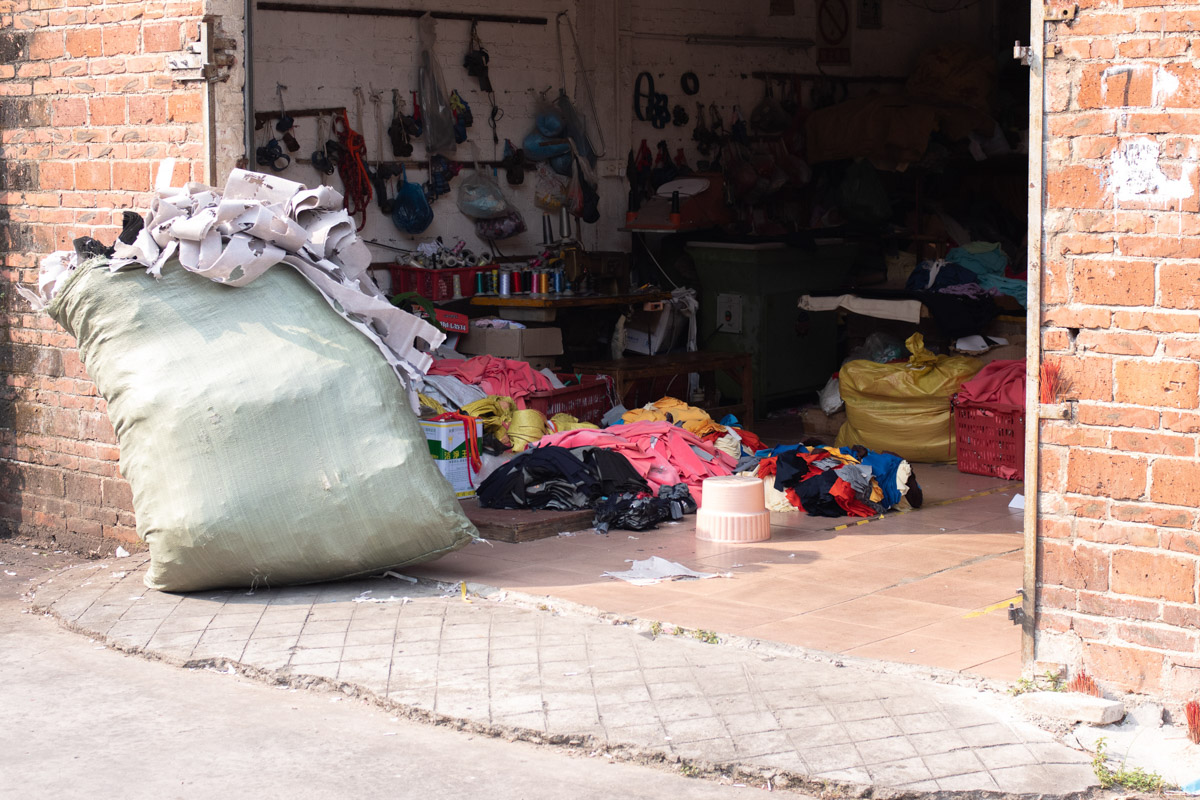 There is a strong stereotype in Russia, that China is a country of fakes and low-grade goods. It’s all because of these negligent businessmen who want to buy cheaper and sell with maximum benefit. Products of the supreme quality are manufactured at the large official factories of the Celestial empire, which are purchased in the domestic market and are departed to Europe and the United States. 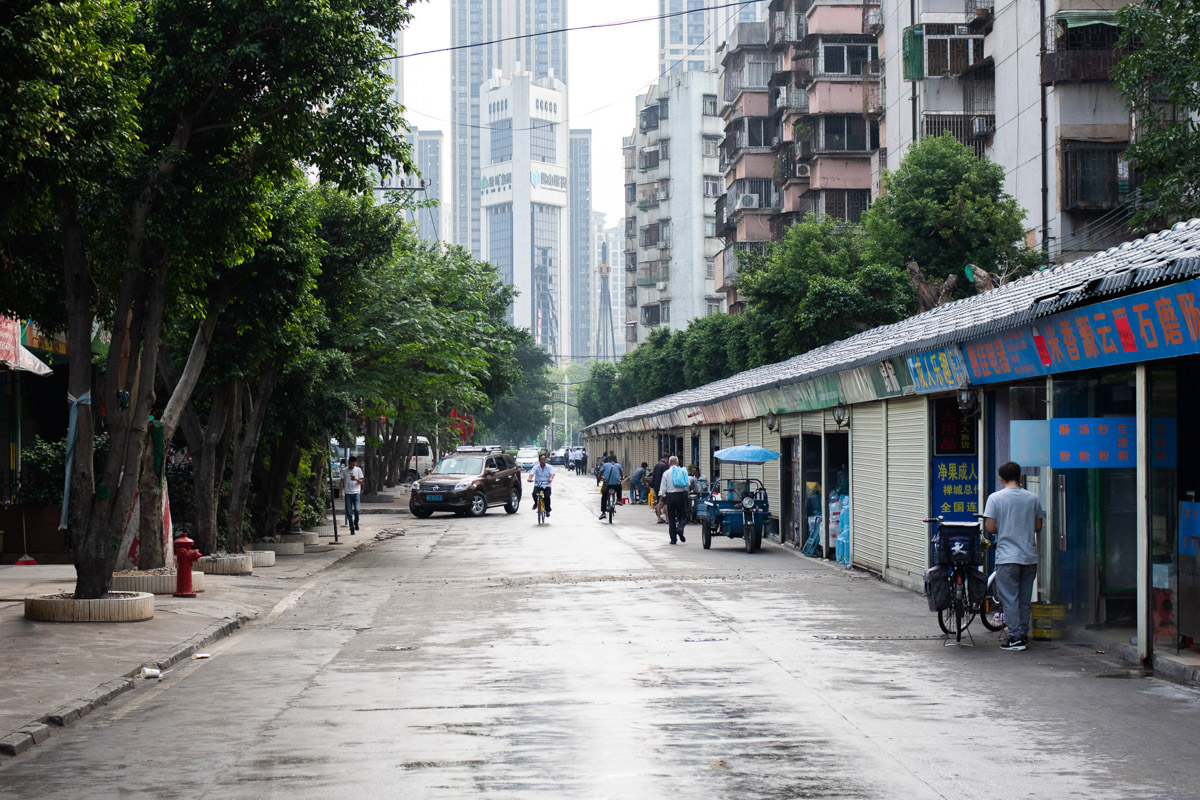 After what I saw on this street and the markets of Guangzhou, my desire to buy something in the Russian clothing stores is completely disappeared. From now on, I avoid even the most expensive shopwindows, glittered with numerous brands. Investing in profiteers is not my choice! It’s cheaper and more practical to buy an inexpensive ticket to Europe and buy there the entire wardrobe for the season at once.