Good protected and shock-resistant smartphones are produced under the Oukitel brand, which can be found even in the Russian market. We’ve got acquainted with representatives of the factory at the MWC exhibition in Barcelona and they gladly agreed to show us their production in Shenzhen.

The Chinese capital of electronics

Shenzhen city is located on the border with Hong Kong not far from Guangzhou. It’s a separate settlement with its own seaport and international airport. Road and rail connections are well developed. In short, the ideal conditions for an economically successful region have been created. 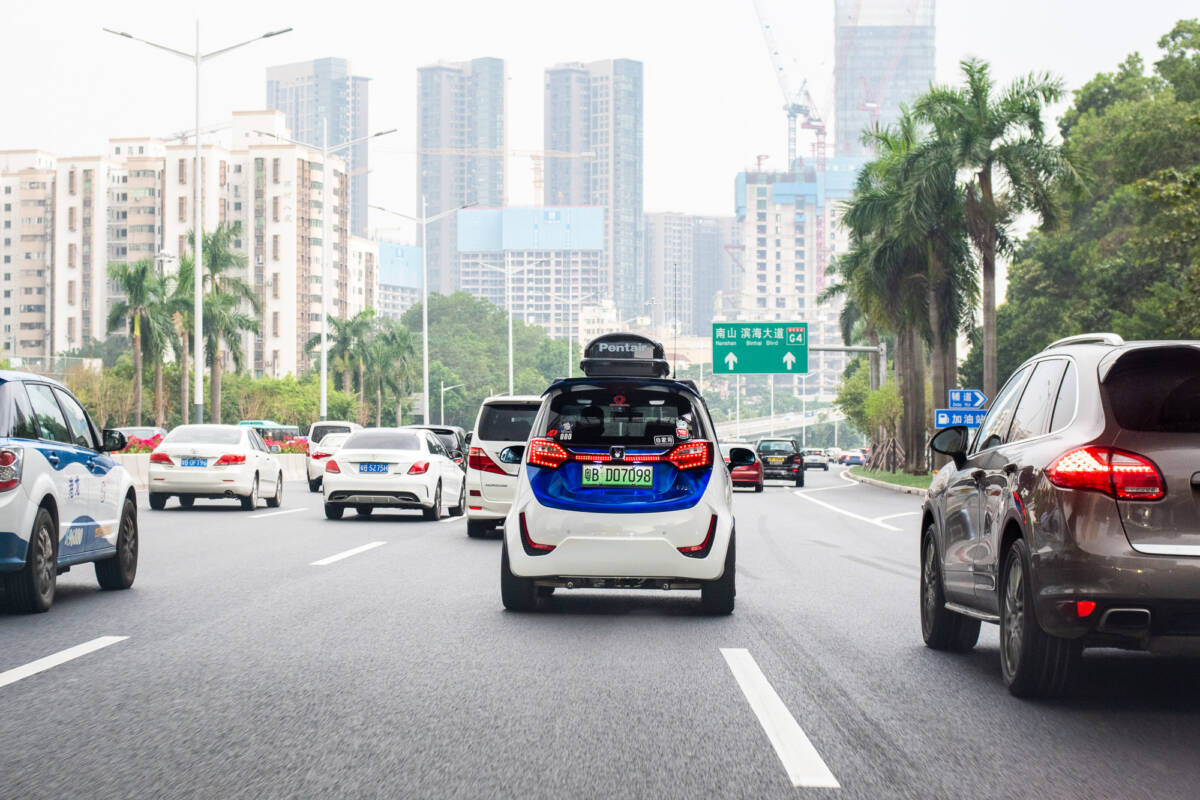 Life in Shenzhen is expensive, but there are much more opportunities than in the province. For example, a sales manager of a company such as Oukitel can expect a minimum salary of 10 thousand yuan. A worker at the factory, having received a free hostel and other privileges, can earn “at the beginning” up to 2-3 thousand yuan. 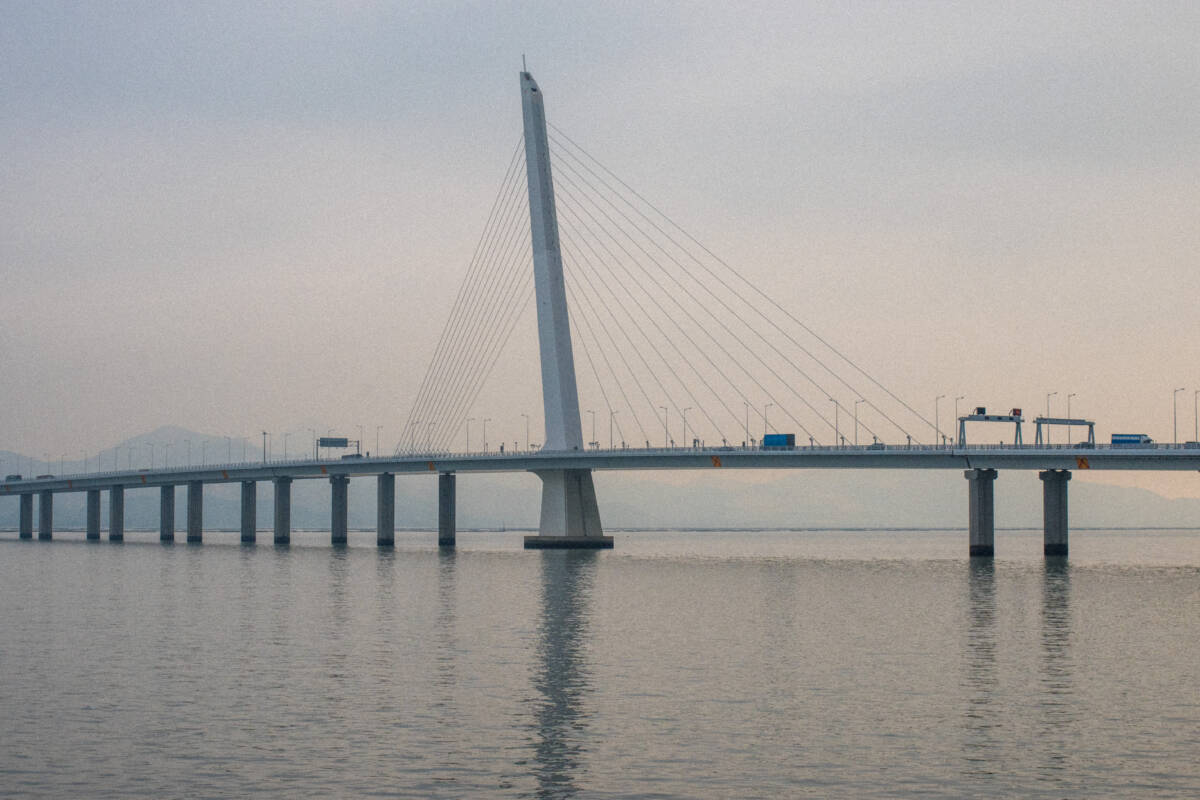 In 2016, the population in Shenzhen was approaching the threshold of 12 million people. China’s electronics capital is dotted with sky-high business centers, industrial and economic zones, markets and exhibition complexes. Here come sellers to buy up gadgets from around the world. The major part of Apple’s production facilities are located in Shenzhen. 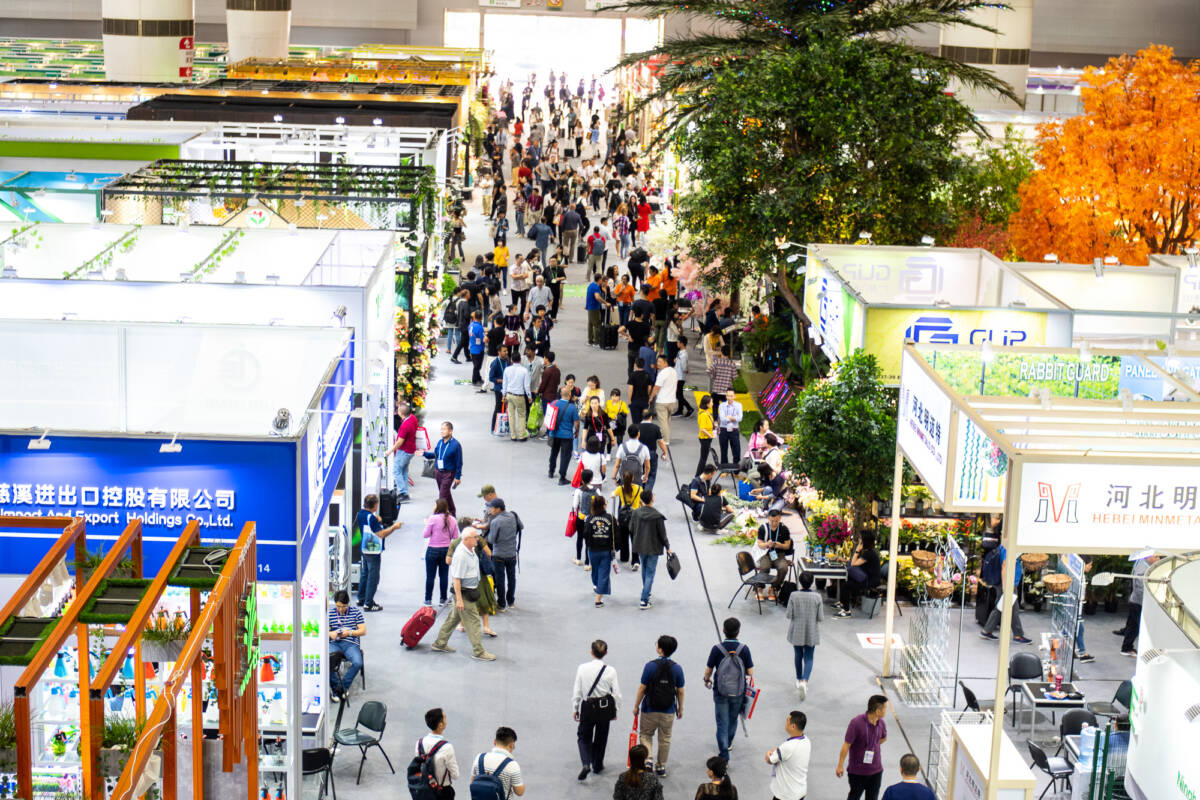 At the presented capacities of the Oukitel factory is carried out only the final assembly of ready-made components. The chips, displays, connectors and related parts themselves are ordered from third-party manufacturers. It turns out that engineers of the company design devices as the constructor, having already a prepared set of the certain components. The final cost of the product depends on the technical characteristics of the installed chips. 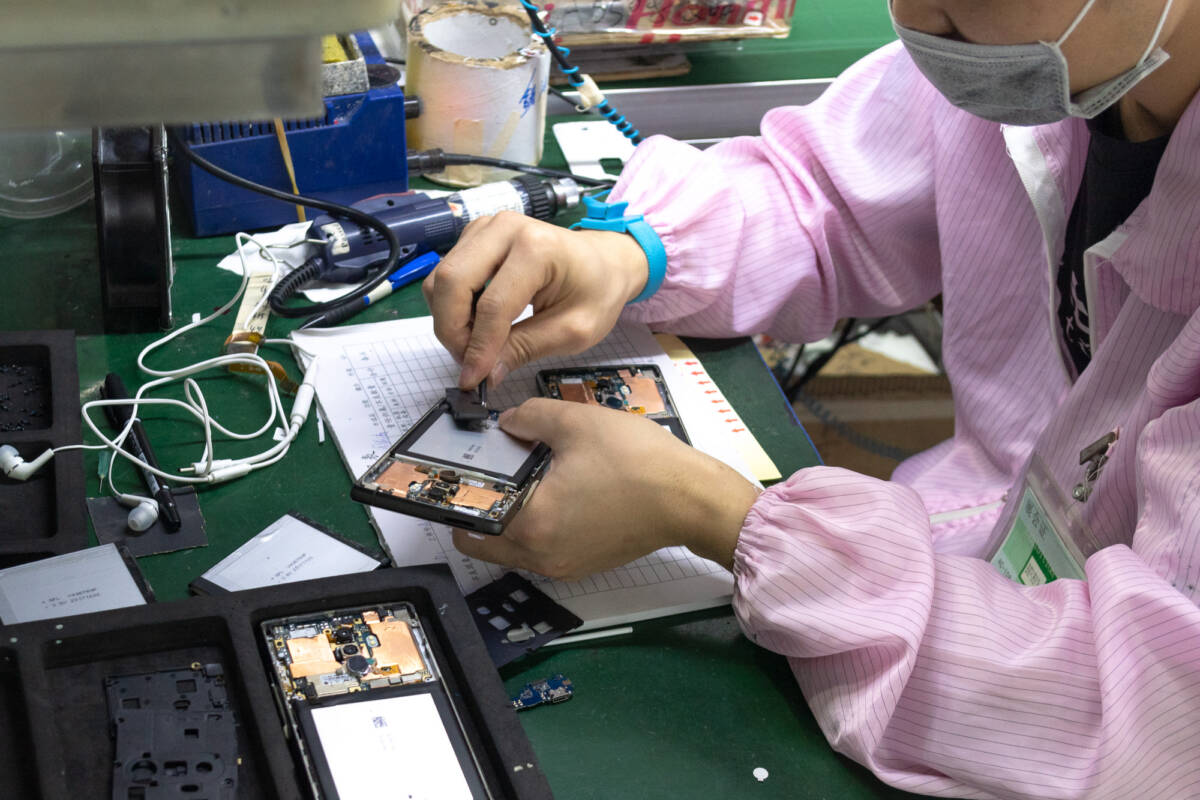 Smartphones “travel” along the conveyor in such trays made of soft material. At each stage, a new component is installed or tested on quality. The large part of the actions are done manually, only few stages are automated. 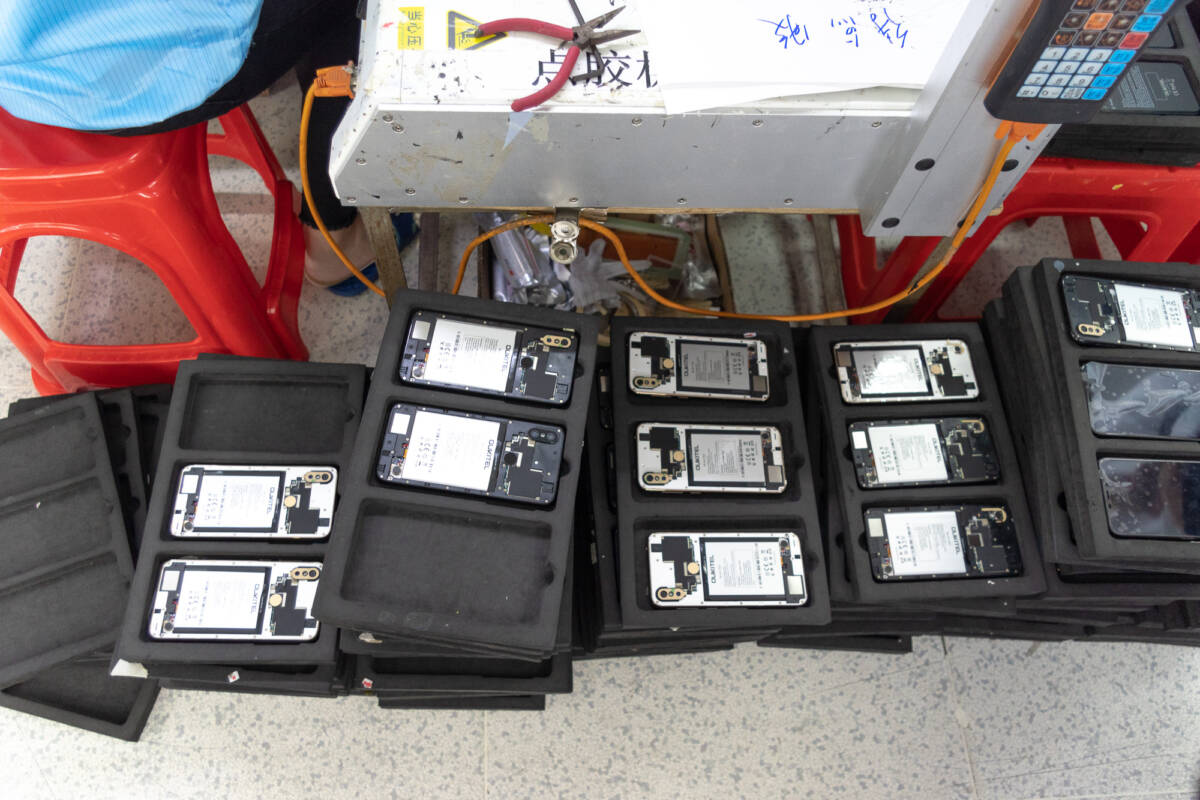 The warehouses are stocked with a huge number of electronic components which are necessary for the final assembly of products. About 100-200 parts, depending on the model, are required to manufacture a protected smartphone. Suppliers are selected exclusively from China, moreover, each detail is separately tested before installation. 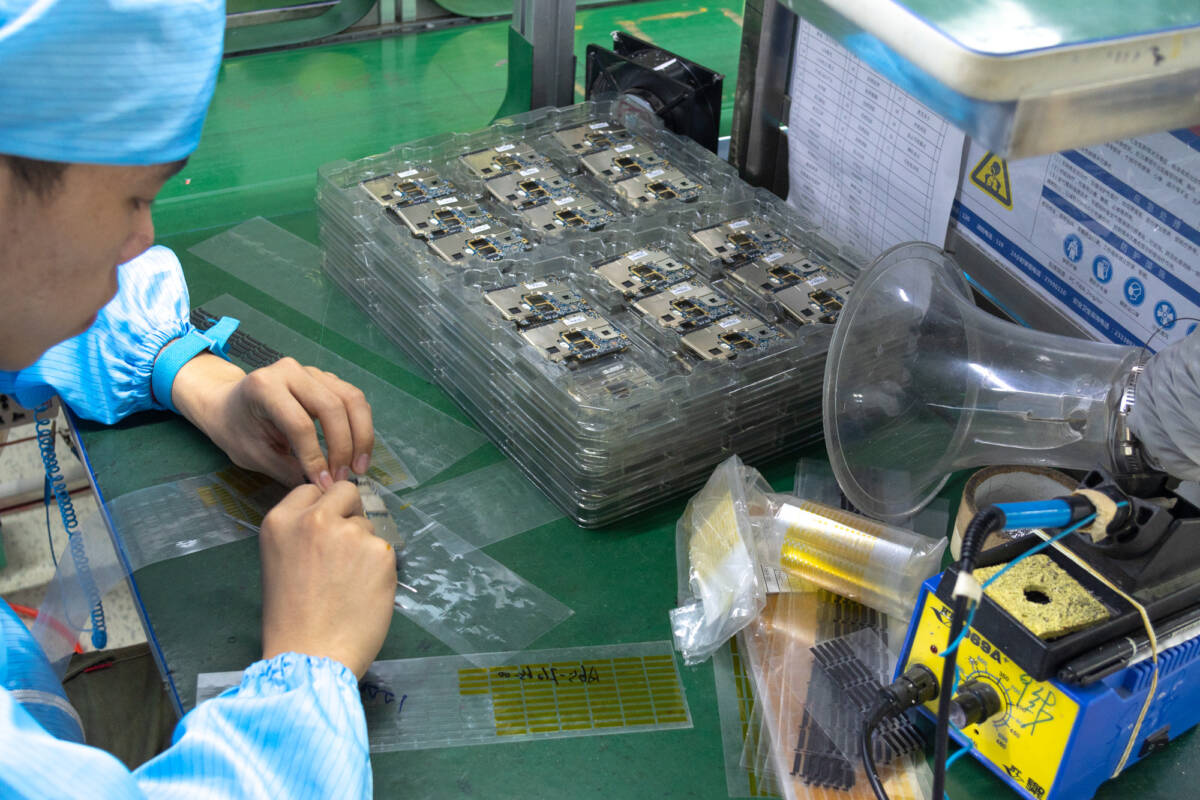 On the next conveyor other production is assemblied – electronic heaters of tobacco. They are also manufactured under the Oukitel brand, but are not supplied to the Russian market. 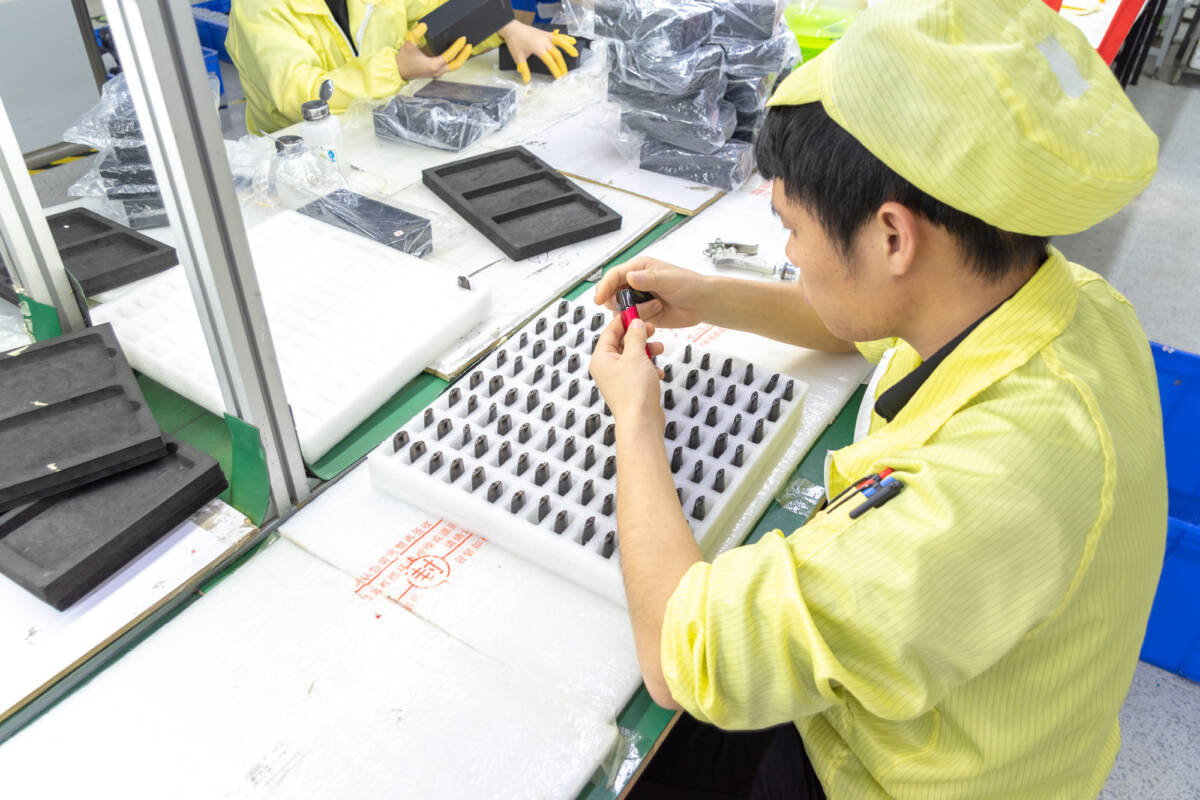 In any modern Chinese manufacture special attention is paid to quality control of production. In the assembly conveyor stations with various tests are met periodically. For example, before the next stage of assembly, the smartphone is checked for tightness with water supplied under high pressure. If there are any problems, the batch is withdrawn and sent for revision. 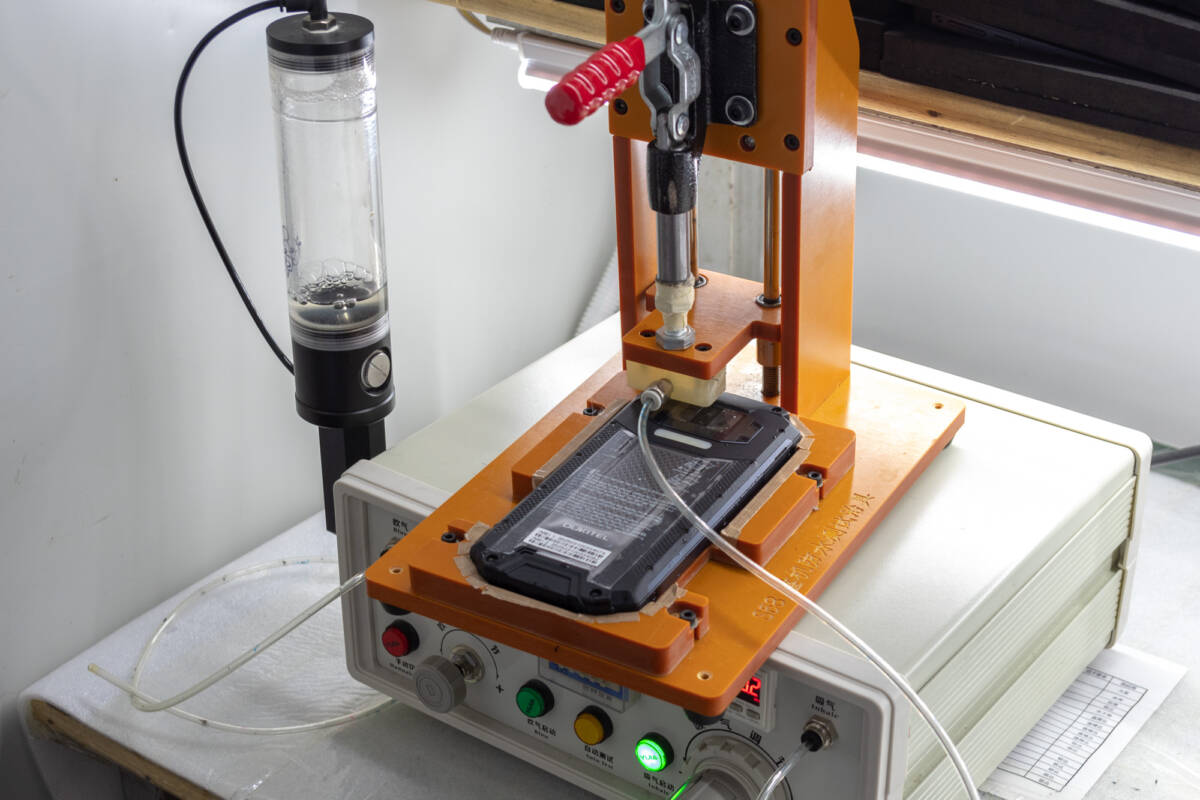 Antennas, GPS and Wi-Fi modules, screens, memory and other electronic components are checked. There are rooms where smartphones are kept on for several days. The Chinese are trying to minimize the percentage of defects this way and reduce the negative from customers. Of course, such actions increase the time of order execution and the final cost of the product. 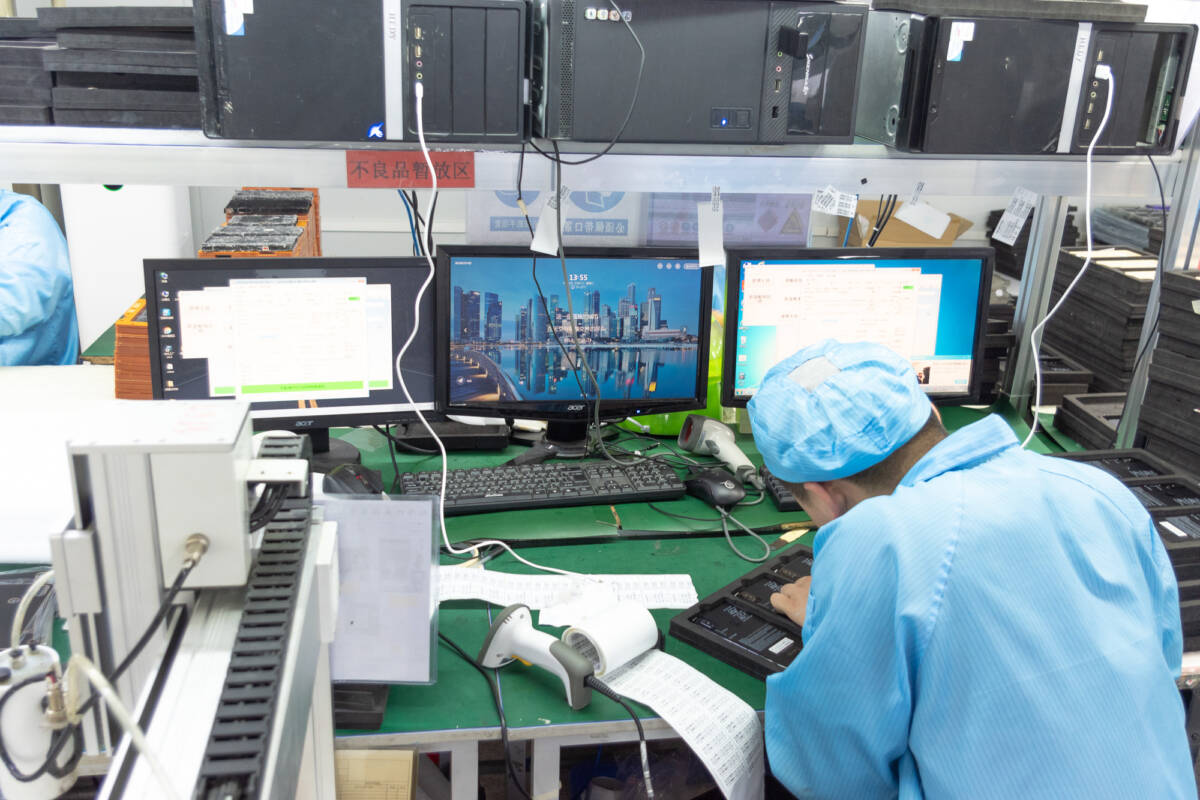 Today businessmen have begun to resort to the help of third-party companies which control the entire production process. Independent experts selectively test a part of the production while assembling your order and form detailed reports. 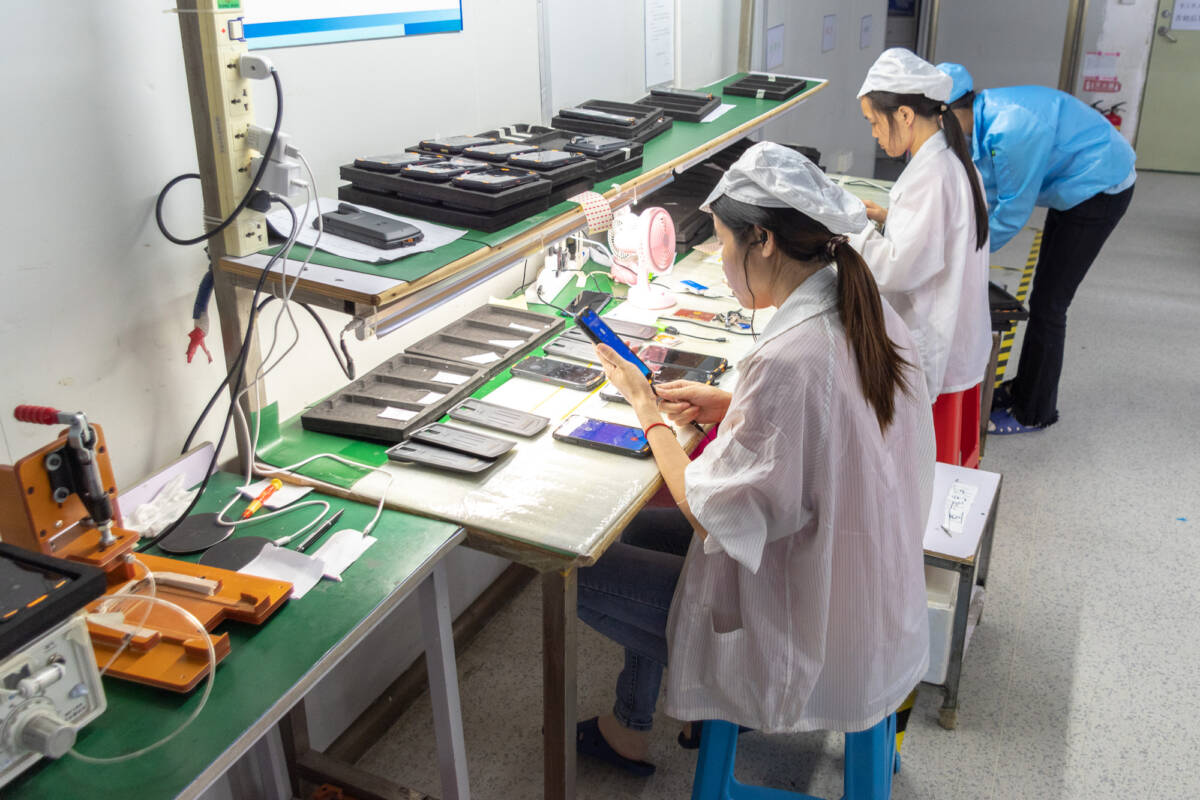 There are special laboratories on the basis of the Oukitel factory, which test individual copies of products for endurance. Smartphones and phones are thrown from a large height, drowned and set on fire. Machines press the buttons endlessly and try to erase the display in the dust. 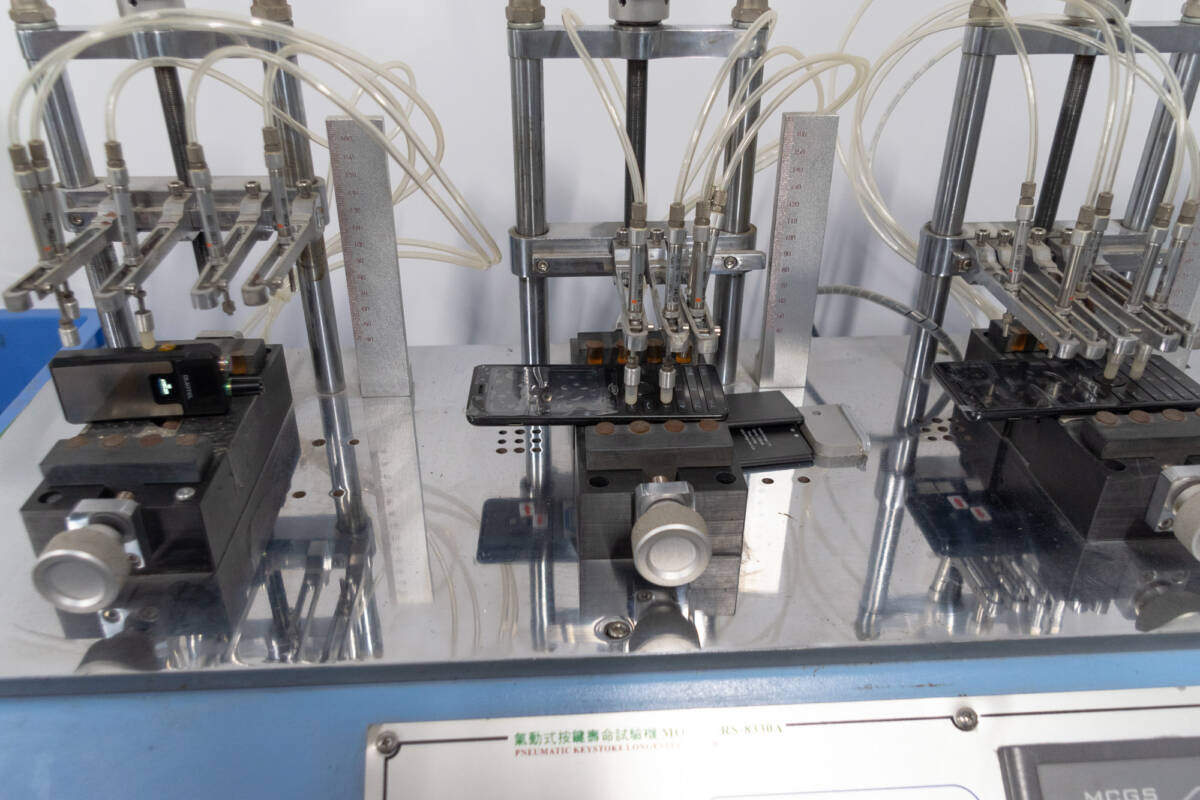 Not only production under its own brand is manufactured on the capacities of Oukitel. The factory takes OEM orders from all over the world. Clients are found at exhibitions and international congresses. For example, the exhibition in Barcelona became a good occasion both to show their own achievements and to sign contracts for new orders. 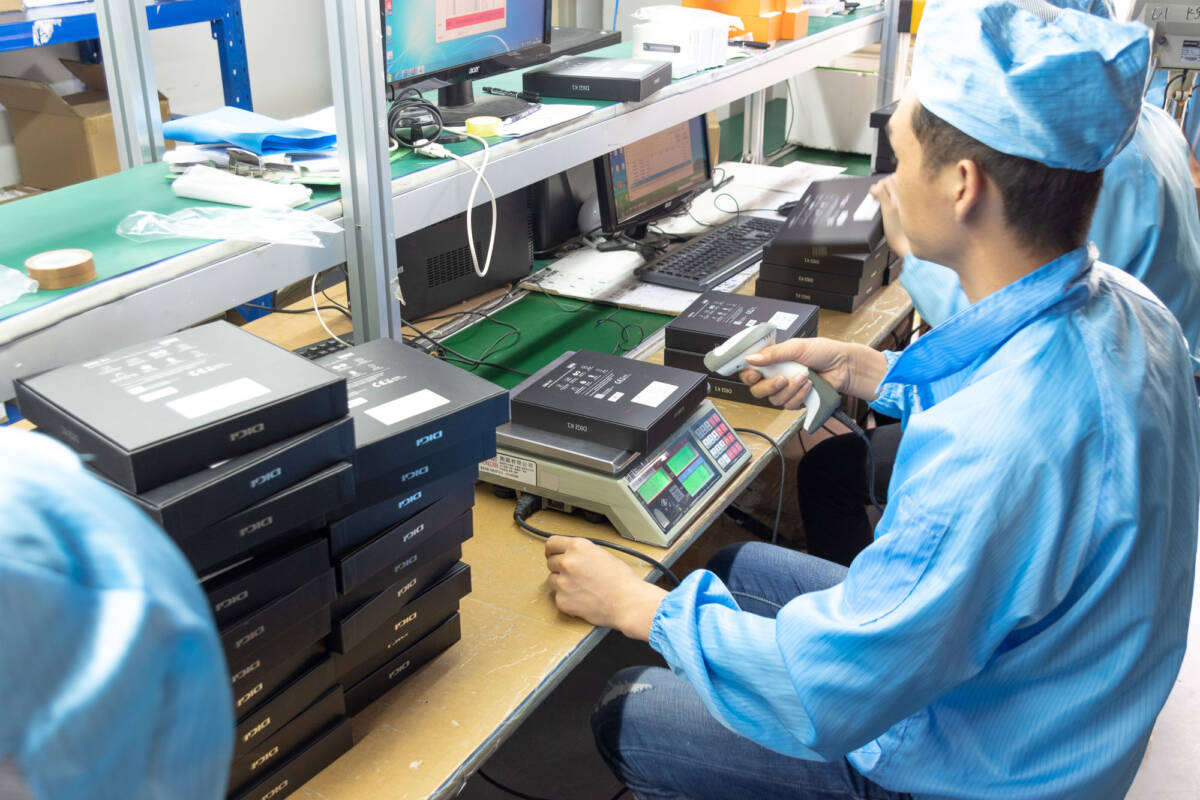 That’s why, any mobile smartphone or phone from the Oukitel line can enter the market under your brand and with unique software. Today, not many large brands build their own factories, more often they order ready-made solutions, looking for interesting novelties at international presentations. 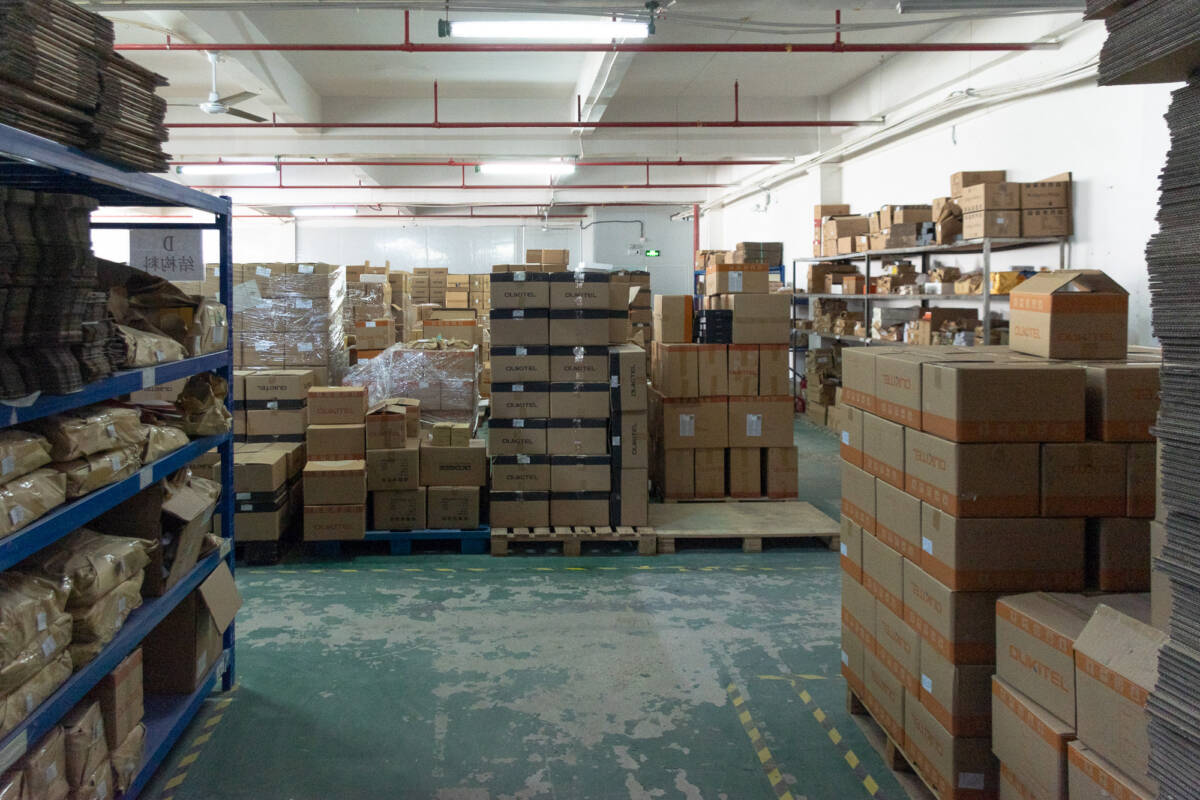 Disassembled smartphones are lied on the tables of other well-known brands which have their own production facilities in neighboring buildings. It smells like industrial espionage… No, head of production calms us down, the neighbouring factory can’t cope with a large order and got help to competitors. 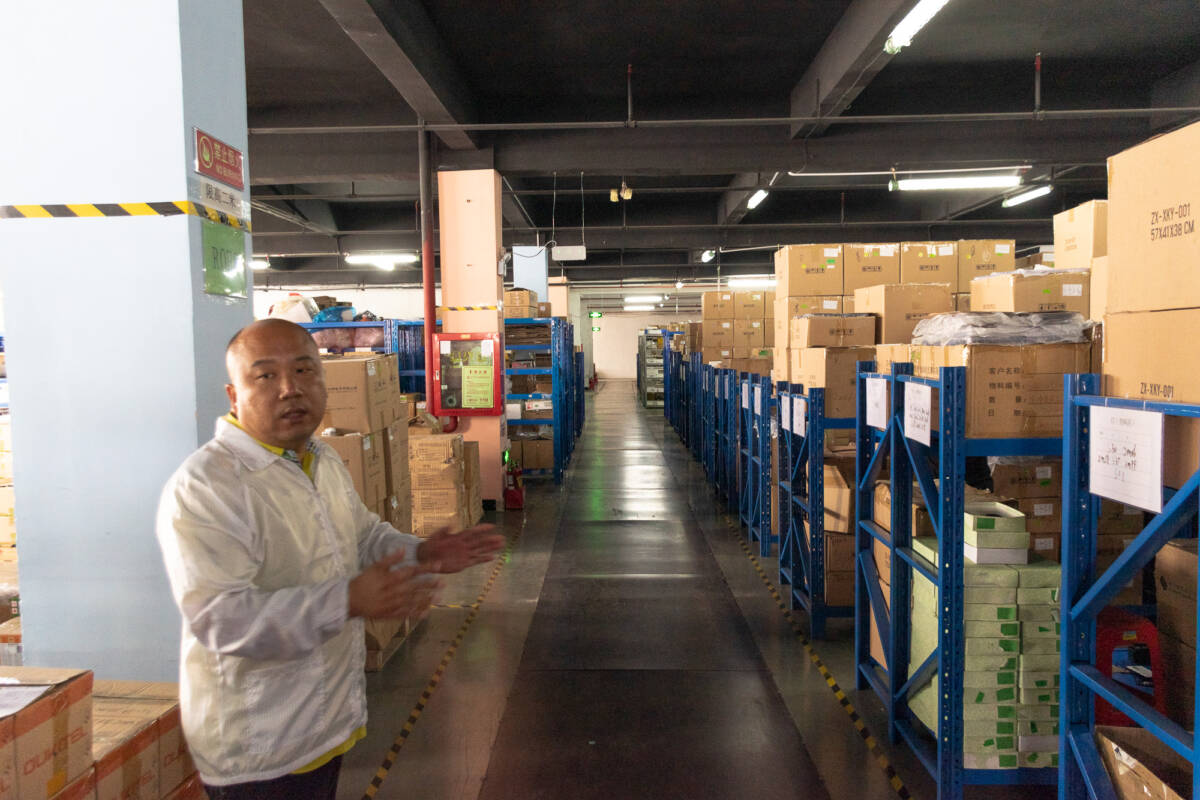 This practice is ordinary for Chinese manufacturers, no one will refuse to earn an extra dollar, even if a competitor requests. In general it’s customary to open a similar production here next to each other, and their owners love to visit each other for tea. 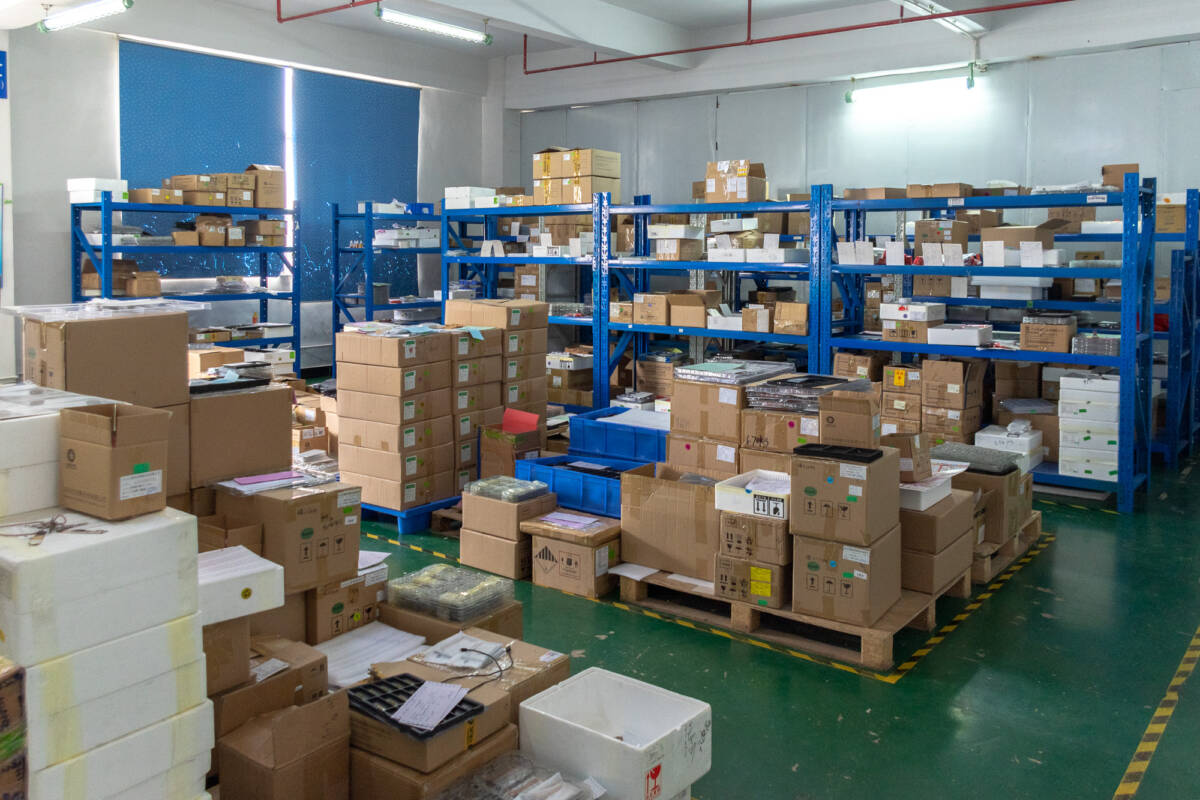 Exchange of experience, joint purchase of technologies and chips, competent distribution of orders and creation of a database with undesirable customers. Such approach to doing business allows to save significantly and make technological breakthroughs faster. 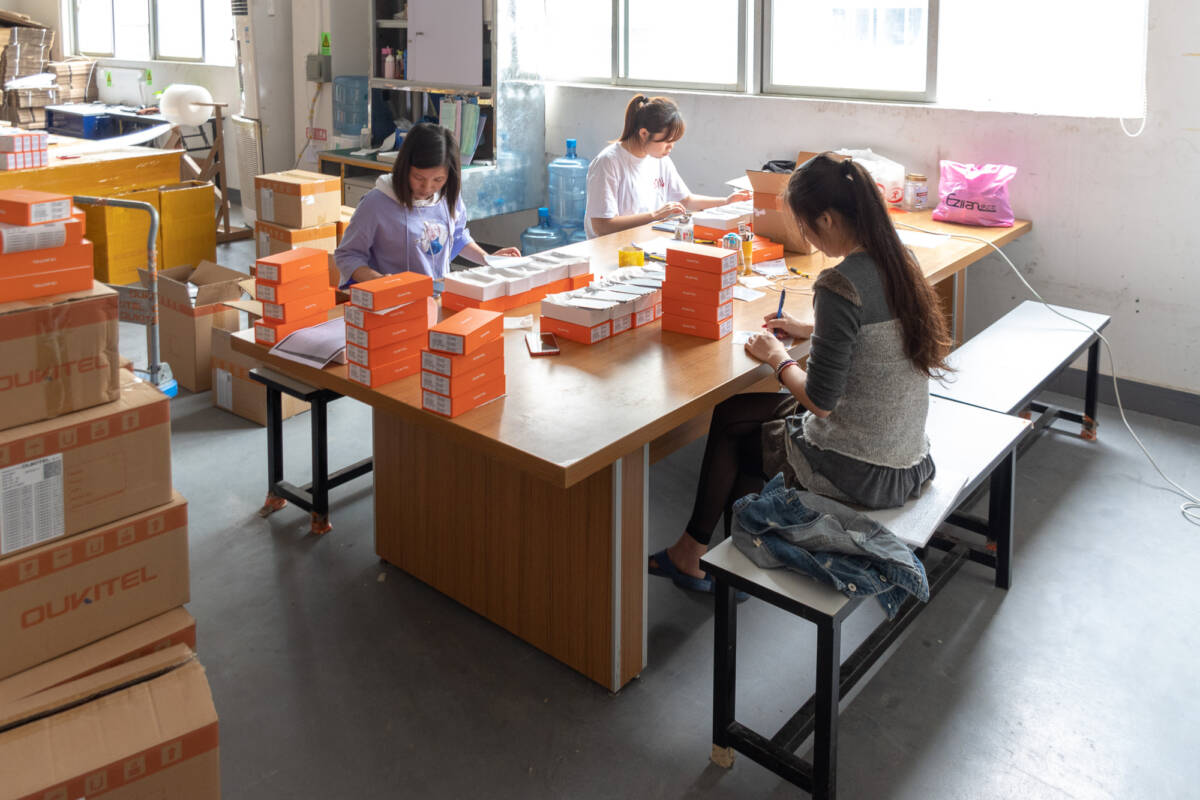 The second thing that immediately catches the eye in Chinese factories is the policy of full openness. The manufacture isn’t hidden behind big fences or armed guards aren’t put up. Before the arrival of journalists the walls aren’t painted here and a new uniform for workers isn’t sewn. The factory and all the facilities are shown the way they exist every day.